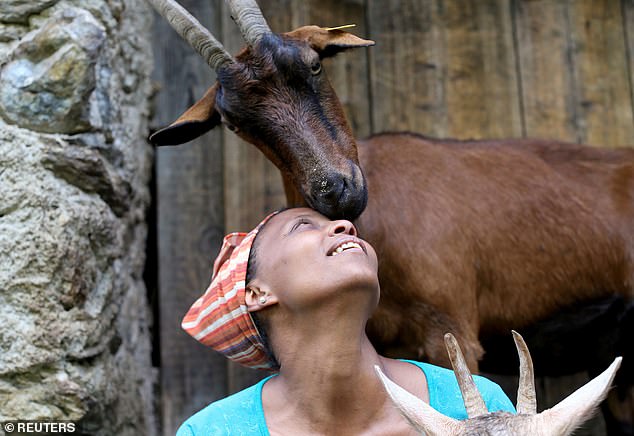 Italian authorities have arrested a shepherd in connection with the murder of an Ethiopian refugee who had become a symbol for integration in Italy after founding a remote farm to protect a rare breed of mountain goats and build a thriving cheese business in the Alpine countryside.Police said Agitu Ideo Gudeta was killed on her farm.A Ghanaian employee on the farm in northern Italy has confessed to killing the 42-year-old before raping her as she lay dying, Italian media says.The suspect, 32-year-old Adams Suleimani, is said to have killed her with a hammer in a dispute over an unpaid salary.Gudeta, who fled Ethiopia in 2010, had made her home in the Valle dei Mocheni and was seen as a shining migrant success story at a time of rising hostility towards immigrants in Italy.
MORE READING!  14 deaths recorded as Ikorodu cult clash enters third day
Gudeta was renowned for making goat’s cheese and beauty products on her farm La Capra Felice – the Happy Goat – which was built on previously abandoned land.

‘I created my space and made myself known, there was no resistance to me,’ she told Reuters in a 2018 interview.

However, the same year she revealed that she had received racial threats, and earlier this year a man was jailed for nine months for injuring Gudeta.According to news agency Ansa, that man was initially questioned by Italian carabinieri over Gudeta’s death but was found to have no connection.
MORE READING!  N840,000 theft: Court discharges, acquits four teenagers after swearing to Qur’an
Instead, Suleimani was apprehended overnight and taken into custody after confessing to killing Gudeta, it is believed.Gudeta had escaped from Addis Ababa in 2010 after angering local authorities by taking part in protests against government ‘land-grabbing’.Activists including Gudeta had accused the authorities of setting aside large swathes of farmland for foreign investors.On reaching Italy, she was able to use the common land in the northern mountains to build her new enterprise.Starting off with 15 goats, she had 180 by 2018 when she became a well-known figure.
MORE READING!  NSCDC arraigns18-year-old man for allegedly defiling minor
Her story was reported by numerous international media as an example of what migrants could achieve when given the chance.It came as the right-wing League party was enjoying unprecedented success across the country on a platform of clamping down on immigration.The League’s controversial leader Matteo Salvini turned away migrant ships from Italian ports and demanded that other EU countries share the burden of refugees.Gudeta said at the time that she had employed a fellow migrant to help out at her business and was looking to hire at least two more foreigners.Italians struggled to keep up with the gruelling work day, she said, with milking starting at 5am followed by long hikes through the mountain pastures.Daily Mail
Related Topics:Agitu Ideo GudetaEthiopiaGhanaItaly
Up Next