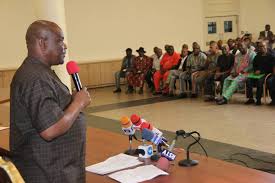 All Former Counselors Forum of Nigeria (AFCFN), has called on all registered political parties to include all democratically elected past counselors, who are card-carrying members, as statutory delegates during primaries and congresses at all levels.

The forum made the demand in a statement jointly signed by its National President, Mr. Chigozie Eze, and National Publicity Secretary, Mr. Matthew Ochonogor in Abuja.

Eze described members of the forum as the grassroots representatives, saying it became necessary to ensure inclusive participation in the political party electioneering process and leadership of the country.

He said that the forum made the call after wide consultation with the leaders, stakeholders, and opinion molders at the grassroots across the various wards in the 744 Local Governments in Nigeria.

Eze said that the demand was key “for the purpose of all Inclusive participation in political party electioneering process.

“There is the need for the grassroots to be duly and effectively involved and represented in party primaries and congresses for the selection of political party candidates and leadership respectively at all levels.

“The AFCFN wishes to demand that all registered political parties in Nigeria should, as a matter of necessity and fairness include all democratically elected past counselors that are card-carrying members in their various political parties as statutory delegates during party primaries and congresses at all levels.

“As critical stakeholders in the grassroots and people closer to the masses, we feel their pulse.

“Having carefully analyzed, put into proper perspectives the wishes, views, and aspirations of the grassroots, it has, therefore, become expedient that the past councilors be integrated with the selection process of political party candidates for elections and congresses at all levels.

“Mass and all-inclusive participation being the fulcrum of democracy, which is ‘government of the people by the people and for the people’, the grassroots undoubtedly need to be properly and actively represented in all democratic processes and that is what we – AFCFN stands for,” he said.

Eze added that the demand is granted by all political parties, would go a long way in reducing voter apathy in the country.