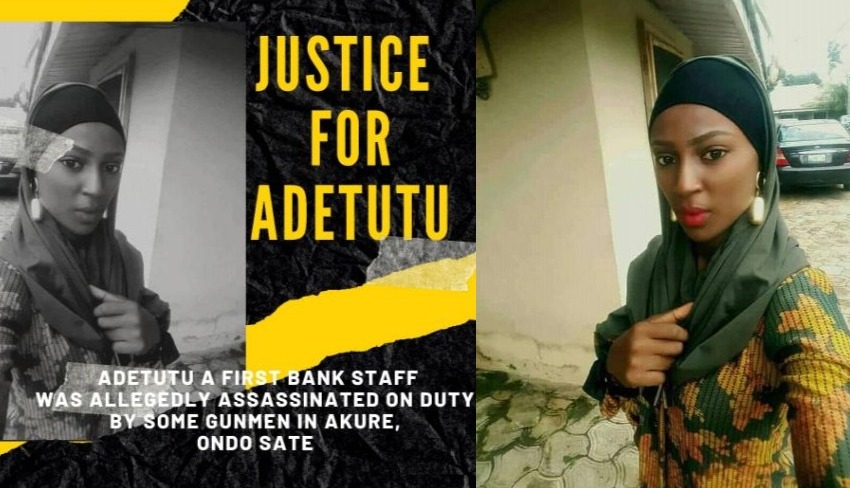 Family and friends of late Adetutu Ibrahim, a staff of First Bank, Oja Oba branch in Akure, the Ondo State capital, are calling on the Ondo State Government and Nigerian Police Force to investigate and prosecute her killers.

The deceased, who handled the Point of Sales (PoS) at the bank branch, was allegedly assassinated on Wednesday evening at Oke Ogba area of the state capital by two unidentified gunmen.

WUZUPNIGERIA gathered that Adetutu, a graduate of Mass Communication from Adekunle Ajasin University Akungba-Akoko, earlier had a misunderstanding with some customers over the issuance of PoS.

She was said to have received several death threats after the misunderstanding which she reported at the police station before she was eventually murdered a few days after.

According to her fiancée, who doesn’t want to be named, the police have arrested three suspects in connection with the murder.

He said all the suspects arrested are females –  a popular businesswoman in Akure identified as Mrs. Adebusola ‘Madam Gold’, Mrs. Teju; and Mrs. Ilori.

The man also alleged that his life is under threat from the same suspects who murdered his fiancee.

He highlighted that the Bank manager of First Bank, Akure branch, Tunde Temola, where Adetutu worked before her gruesome murder is aware of the happenings after several reports were made to him before the death of Adetutu.

“Adetutu informed me she was assaulted on duty on that day by three women who posed as customers.

“She said it was her boss (Tunde Temola) who excused her and one of her colleague (Busuyi) out of the bank to meet the women, Madam Gold, Iya Oyin and an ex-staff of the Mrs Ilori who requested for the registration of POS within the state. She told them their request could not be granted at their preferred location and she advised that they get another location.

“She said one of the women slapped her for turning down their request, and her colleague (Busuyi) was also assaulted and was dragged into the gutter by some thugs around the bank area. She informed me that all these happened in the presence of the bank manager.

“Shortly after that, a guy known as Alake who is Iya Oyin’s younger brother called me to inform me about the incident. I then asked him to give the phone to her sister, who told me she ordered that my fiancee be beaten, and they wanted to strip her naked in the open market.

“I asked what her offence was to deserve such inhumane treatment, She just dropped the call. Her brother told me to settle the matter amicably. I then tried to call Iya Oyin for us to meet at the market to reconcile, but she turned down my request for truce and started threatening to deal with me and my Adetutu.

“The next day I met Alhaja and Mrs Ilori. Alhaja told me all the thugs in Akure worship her and I should be very careful, but I begged her and directed my fiancee to inform her dad about the situation and she did.

“She made a report at the police headquarters. After she left the police station, she returned to her Bank, later in the evening she told me she wanted to visit her POS point where she usually go to audit account. This shop was overseen by some keepers. It ws while she was at the shop that two men held her and others hostage and tried to strangulate her to death, but she managed escaped, as she was running for safety, they shot her on her chest and she died. They didn’t take anything from the shop, because there was N210,000 cash there.”

Meanwhile, some residents of Ondo State, as well as close associates of the deceased, are seeking justice for the late Adetutu.

They called for a thorough investigation into the case, saying the culprits must be made to face the full wrath of the law.

They also bemoaned the alleged silence of the deceased’s employer over the incident.

Police launch manhunt for woman who bought baby for N300,000