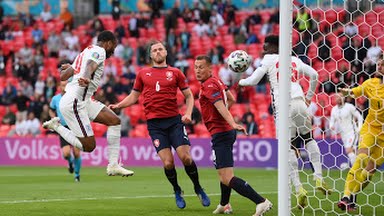 England secured their place in the last 16 of the EURO 2020 by defeating Czech Republic 1-0 at Wembley Stadium on Tuesday.

The former Liverpool man hit the post in the opening second minute before netting the winner with a header (12′) from Jack Grealish’s Cross.

Liverpool skipper, Jordan Henderson, had his first national team goal and Englands second of thd night ruled out in the 86 minute for offside as the Three Lions held on for the 1-0 victory.

Gareth Southgate’s men began their campaign with a 1-0 win over Croatia but a defiant Scotland squad in their second game forced them to settle for a goalless draw.

Unlike in their second game where they were reduced to only a shot on target, England registered three shots on goal as against Czech’s one.