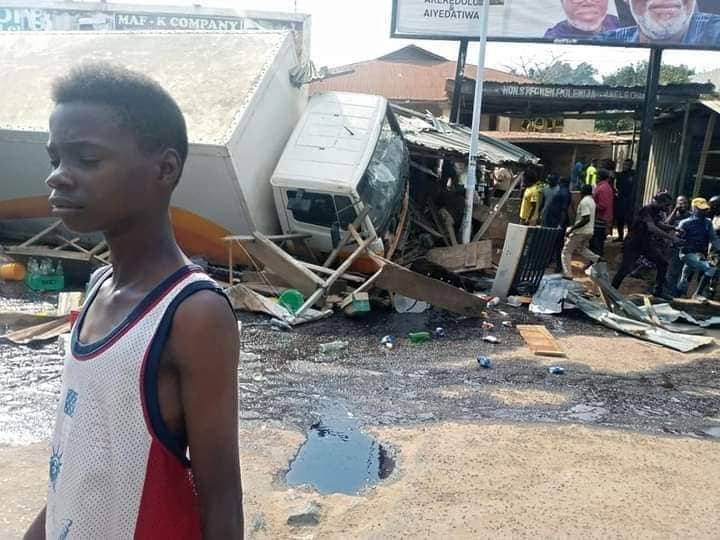 An eyewitness has claimed that no fewer than eight people died in a multiple auto crash, involving a diesel tanker, truck and six motorcycles at Ikare in Ondo State on Saturday.

The deceased included a pregnant woman and her two children.

The spokesman for the Federal Road Safety Corps (FRSC) in the state, Omotola Ogungbawo, confirmed only four deaths.

MORE READING!  Gunmen kidnap 18, including 'mothers and babies', in Kaduna

Scores were reportedly injured as the truck carrying petroleum content crashed at a commercial area of Okorun quarter, killing the deceased while many were injured.

It was gathered that the diesel tanker had a brake failure and crashed into another truck forcing it to crush some commercial motorcyclist, also known as okada riders.

Reports claimed the diesel-ladened truck was coming from Ado Ekiti axis of Ikare-Ado road when it lost control. The reports also added that majority of the dead are okada riders.

The spokesman for the Federal Road Safety Corps (FRSC) in the state, Omotola Ogungbawo, confirmed only four deaths.

Officials of the FRSC said that the accident involved two trucks, four motorcycles and six other vehicles.

The FRSC, police, and the Nigeria Security and Civil Defence Corps rushed to the scene to carry out a rescue operation.

Meanwhile, bodies of the dead and those injured were taken to the lkare general hospital.