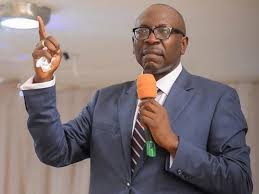 Pastor Osagie Ize-Iyamu, candidate of the All Progressives Congress (APC) in the Edo Governorship election, has promised a better civil service in the state if elected governor.

Ize-Iyamu gave the assurance when he visited the Edo chapter of the Nigeria Labour Congress (NLC) to solicit their support in the Sept. 19 election.

He said his administration would ensure a better welfare package for civil servants that would go beyond payment of salaries.

MORE READING!  Ministry of Interiors give details of attack on correction centers in Edo

“You will see a better civil service if I become Edo governor; I will improve the welfare of workers because they are the people that will move the state forward.

“We will engage our civil servants in modern training here and abroad to ensure they are well equipped to carry out their duties.

“We will also engage them in political roles so they would bring their wealth of experience and skills to governance,” he said.

He regretted that the present government had continued to appoint political aides a few weeks to the election instead of employing teachers lacking in most schools in the state.

The APC candidate said that the present administration had failed to fulfill its promises to complete the NLC secretariat building in the state.

In a related development, Ize-Iyamu promised spare parts dealers at the Uwelu market, to transform their market gutted by fire into an ultra-modern one.