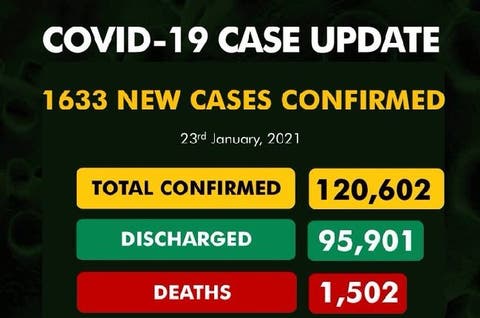 The Nigeria Centre for Disease Control (NCDC) has recorded 1,633 cases of the Coronavirus (COVID-19), bringing the total number of infections in the country to 120,602.

The NCDC disclosed this on its official website late Saturday.

It also confirmed additional five coronavirus-related deaths in the past 24 hours, bringing the death toll to 1,502 in the country.

The agency added that the additional 1,633 new COVID-19 infections were in 20 states and the Federal Capital Territory (FCT).

It stated that while Lagos and Plateau states posted the highest number of cases, the former recorded a drop in number of infections whereas it rose in Plateau.

The public health institute said that 1,024 people had been treated successful and discharged from various isolation centers across the country.

It added that the discharged included 573 community recoveries in Lagos State managed in line with its guidelines.