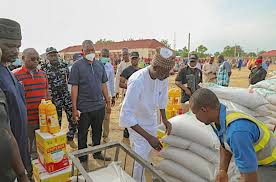 Sen Basheer Mohammed, the Federal Commissioner of the NCRMI, presented the items to the representatives of various IDP camps in Jalingo for onward distribution to their members.

Mohammed, represented by Alhaji Sudangi Jubrin, the Administration Officer of the commission, told the IDPs that President Muhammadu Buhari was concerned over their welfare.

”Mr President directed NCRMI to provide you wit these materials. We are also here to begin housing projects for IDPs the country.

“President Buhari has empowered NCRMI to construct resettlement cities for displaced persons in the country.

“The project, which consists of 600 units of two bedroom flats with schools, worship and skills acquisition centres, has already began in the pilot states of Borno, Katsina, Zamfara and Edo,” he said.

Also speaking, Mr Paniga Binga, the Taraba Commissioner for Special Duties and Humanitarian Affairs commended the commission for the gesture.

Binga, however, appealed to the federal government to expedite action on the return of displaced persons to their homes.

”Taraba has 31, 460 IDPs and over 15,000 refugee. We need logistics and security support to ensure they return home safely”, he said.

The News Agency of Nigeria (NAN) reports that items donated include refrigerators, generators, rice, maize, millet, gari, palm and vegetable oil among others.

Trump sets up ‘office of former president’ in Florida