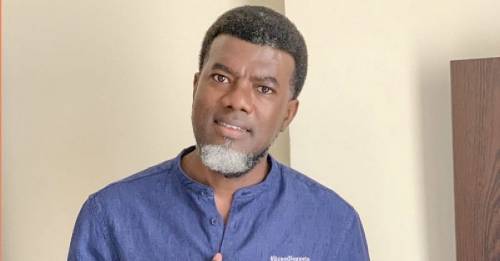 A former presidential aide Reno Omokri, has opined that the Boko Haram terrorists, bandits and killer herdsmen have more confidence than the Nigerian army.

In a tweeted to his followers on Saturday, Omokri suggested that the terrorists, abductors and killers grow stronger because they have eliminated uniformed men more than the soldiers.

The rights activist criticised the amnesty and rehabilitation programs of the President, Major General Muhammadu Buhari (retd) as the reason for the confidence grown by the terrorists, kidnappers and killers.

The tweet read, “Boko Haram, Bandits and killer herdsmen have more morale than the @HQNigerianArmy. Why? Because if they catch soldiers, they will kill them. But if soldiers catch them, @MBuhari will either rehabilitate them or grant them amnesty. They have no reason to fear?”

In a subsequent tweet, Omokri said, “I find it perplexing that the same Nigerian government that killed peaceful, unarmed #EndSARS protesters at #LekkiMassacre, and froze accounts of activists fighting for Nigerians, is now toying with the idea of granting amnesty to bandits and killer herdsmen.”

Omokri’s comment comes amidst the concerns of insecurity in the country which has seen the rise to acts of terrorism by Islamic terrorists – Boko Haram, abductions of school students in the north by suspected bandits, killings by AK-47 wielding herdsmen.

The country is also witnessing recent ethnic clashes between the Yorubas and the Hausas in the south-west, no to talk of the confrontations between the army and members of the Eastern Security Network – ESN of the Indigenous People of Biafra (IPOB) in the eastern part of the country.

Meanwhile, there have been “two serious cases of kidnappings –the NTSA (Niger State Transport Authority) bus that was kidnapped (with passengers). And the second event took place at the Secondary School in Kagara” in Niger State, according to Governor Abubakar Bello.

However, the Minister of Information and Culture, Lai Mohammed, has on Saturday denied the report and stated that the government will not pay ransom to bandits.

Prior to this, there were reports that popular Islamic scholar, Sheikh Abubakar Gumi negotiated with the bandits to secure the release of the abductors but Governor Bello was quick to deny the reports stating that they are mere rumours.

Although Bello said the abductees are yet to be released, Gumi’s intervention and meeting with the bandits has attracted a lot of backlashes from Nigerians.

At the moment, there are no reports on the kidnapped passengers in the NTSA (Niger State Transport Authority) bus as revealed by Governor Bello.