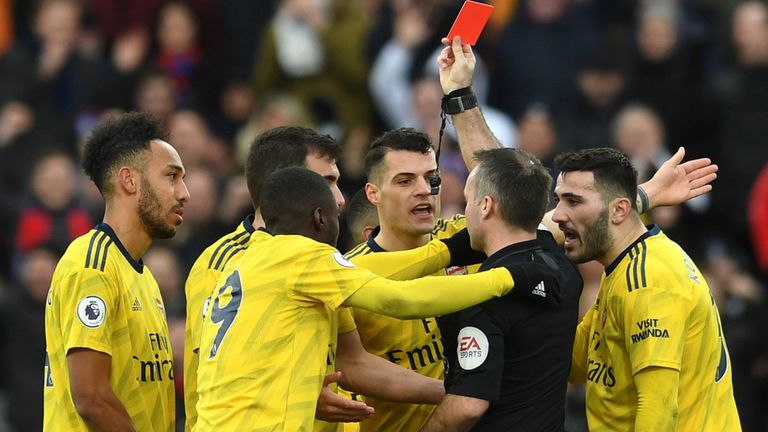 Arsenal’s appeal against Pierre-Emerick Aubameyang’s three-match ban for the red card he received in the draw at Crystal Palace has been unsuccessful.

The 30-year-old was sent off midway through the second half of Saturday’s 1-1 Premier League draw at Selhurst Park after catching Max Meyer high on the ankle with a poor challenge by the touchline.

Aubameyang, who is Arsenal’s top scorer in all competitions this season with 16 goals, will miss the Premier League matches at home to Sheffield United and away to Chelsea, as well as the FA Cup fourth-round tie at Bournemouth.

After confirming the unsuccessful appeal, Arsenal head coach Mikel Arteta said on Wednesday: “It’s a big shame and a big loss for us.

“But unfortunately he mistimed the tackle, he made a decision and we have to accept it.

“He was very sad after the game, he was disappointed. It was an action that was completely accidental in my opinion.

“He’s been superb under me. He’s training well, scoring goals and has probably been the most important player in the team so to lose him is obviously really bad news for us.”

Arteta coached Stones for three years at Manchester City, after joining the club at the same time as the England centre-back in the summer of 2016.

Asked if there is any truth in his reported interest in Stones, Arteta said: “No, no truth at all.”

EPL: Manchester United ‘draw up list of replacements’ as Pogba likely to leave in the summer