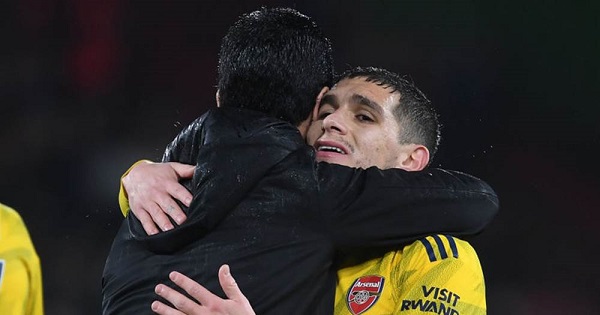 Mikel Arteta has called for an understanding in reaction to Arsenal’s midfielder, Lucas Torreira’s emotional public plea to leave the club this season.

The manager urged the midfielder to remain calm, saying he believed his decision was probably influenced by the recent death of his mother.

Torreira joined Arsenal in the summer of 2018 and made a positive impression under former manager, Unai Emery.

The Uruguay international, however, found life much difficult during his second season at the club, after Emery put him in a more advanced role.

He then featured prominently during the early weeks of Arteta’s reign but was hit by an ankle injury and he is now struggling to win his place back in the team upon his return to fitness.

The midfielder was sent out on loan to Atletico Madrid following Arsenal’s decision to sign Thomas Partey back in September.

But after starting on a very bright note in Spain, his career has suffered again and has been unable to win a regular place in Diego Simeone’s team.

Torreira subsequently made a public request to end his European career and complete a dream move to Boca Juniors.

Arteta expressed sympathy for Torreira’s plight, stressing that any decision would have to suit all parties involved.

“We have contacted him, we have spoken to him we know how much of a difficult time this is for him. He was really attached to his Mum and with his family and it’s a hard time for him emotionally,” Arteta told reporters.

“There is a lot of thoughts and things that go through his mind but… ‘tranquilo’ when things are like that it is not the moment to make decisions.

“I understand I understand how he’s feeling emotionally his need and responsibility to be closer to his family but this is not the moment to make any decision. Certainly, it’s a decision that will have to be made by different parties and now nothing is going to change.

Related Topics:Arteta reacts to Torreira’s plea to leave EmiratesTorreira wants to leave Arsenal
Up Next