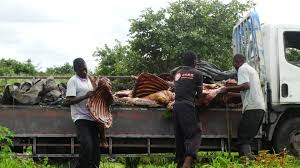 At least 24 people were reported to have been hospitalized in western Zambia’s Nalolo district after consuming meat suspected to have been poisoned, the police said on Tuesday.

Police spokesperson Esther Mwaata-Katongo said 12 of the victims were juveniles while the rest were adults.

In a statement, the police spokesperson said the incident happened in a remote area of the district and that the victims were rushed to two hospitals in the district.

She, however, said when police visited one hospital where 14 victims were admitted, they only found four while the conditions of 10 others admitted to another hospital have not yet been established.

“Investigations have been instituted in the matter and the carcass will be subjected to laboratory examination,” she said.