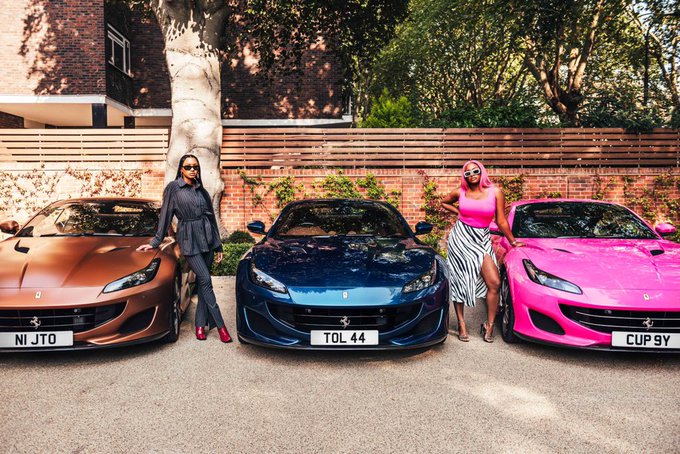 Billionaire Femi Otedola trended on social media yesterday after the news broke out that he bought three Ferrari Portofino cars for his daughters.

Shortly after receiving the automobile, the ecstatic ladies took to their social media handle to share pictures and videos of their new ‘whip’.

Overly joyous, DJ Cuppy took to her Instagram posting the picture of her new pink Ferrari car with the caption, “Papa took us shopping and bought one of each!”

No sooner had the billionaire daughters posted the pictures of their new ride that Femi Otedola’s name and those of his daughters occupied the first top ten trends on Twitter Nigeria.

A look into the life of the daughters shows that they have not always been all about their father’s wealth as they have been making successes of their own, especially in the entertainment industry.

Probably due to his ‘babies’ achievement, the billionaire decided to spoil his daughters silly by getting each of them a Ferrari.

Femi Otedola’s first daughter, Tolani, is a singer and songwriter with several songs and music videos to her credit. On her Youtube channel, she has about 11 thousand subscribers.

She has songs with A-list singer like Skales and Reekado Banks, and her music videos are close to raking in millions of views.

Tolani, whom many fans consider to be the laid-back type, recently explained why she keeps most of her affairs private.

“I know how little of myself I share on social media, it’s frustrating to both me and everyone around me. Also stuck in the conundrum of if the world is entitled to all of me or if I can simply belong to myself while just giving you the music,” she shared on Instagram.

MORE READING!  EndSARS protests are beyond calls for scrapping of SARS - Seun Kuti

Funnily, when her sisters had a photoshoot with the new Ferrari cars their father bought for them, Tolani didn’t appear in any of the pictures.

She, however, took to Instagram to appreciate her father for the gift, saying, “Thank you so much, Papa, for the most stunning gift. Love you.”

Florence Otedola is popularly known as DJ Cuppy, is the second daughter, is apparently the most popular of them all due to her work as a disc jockey.

She has hit songs with top singers like Tekno, Zlatan Ibile, Mr Eazi, MastaKraft, among many others. Her Youtube channel has about 102K subscribers with lots of videos raking in millions of views for the DJ.

Also, DJ Cuppy who is a football lover recently dumped Arsenal Football Club for Manchester United, a move which saw her model for the club’s new kit.

She is expected to hold a project with Twitter CEO, Jack Dorsey after he responded to her tweet about ideas which she has for the social media platform.

Temi Otedola
The last daughter in the billionaire family, Temi Otedola, got a brown Ferrari in addition to the Range Rover Evoque which was presented to her as a graduation gift by her father in 2018.

She recently launched her movie career and had her big acting debut in the movie, Citation, directed by Kunle Afolayan.

Before she became known as an actress, Temi was known as a fashion entrepreneur with a website which details her adventures in the fashion world.

She’s in a relationship with singer Mr Eazi who revealed that they met at an event in London which had DJ Cuppy performing.

With the daughters doing well in their endeavours, the Ferrari cars from Otedola might be a way of encouraging them to do more.

Any man intimidated by your success isn’t the man you need, Mercy Eke says