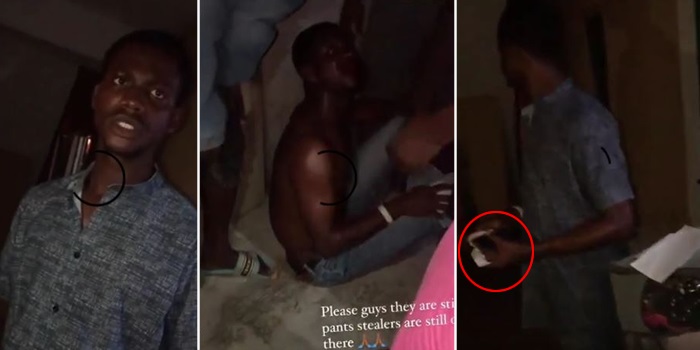 An unidentified pant thief was beaten to a pulp in a video that surfaced in line after being caught in the middle of a pant heist in Nigeria.

The young man, according to the video uploaded by Within Nigeria, comfortably made his way into an all-female apartment alongside an alleged accomplice who directed him into the building.

Like a man on a mission, the yet-to-be-identified individual located the box of panties and took some but was caught by a resident who had been on to him since he entered the building.

Caught in the act and almost speechless, the once bold thief was reduced to a man of few words as he could only mutter “I’m sorry” all through the questioning.

He, however, got a beating of his life when some men came into the scene, obviously invited by the ladies.

Sounds of slaps could be heard echoing almost immediately as the men dealt mercilessly with him.

At the time of t his report, it is yet unknown where and when the incident took place as well as what happened after the beating.