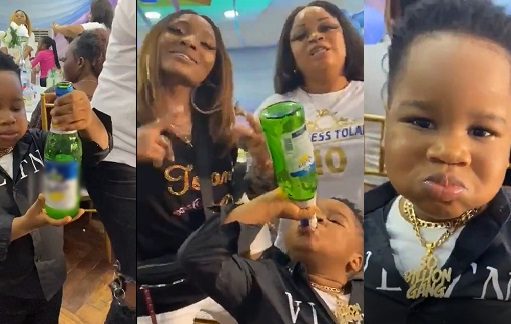 A video making rounds is that of a little boy taking strong alcohol from a beer bottle.

According to the video, the young kid was seen gleefully drinking from a bottle of beer while in a party, in the presence of adults.

The video has garnered a lot of reactions as so many social media viewers can’t seem to fathom what the parents were thinking of watching a boy his age consume alcohol.

The social media user, Izanate, who shared the clip on his Twitter page, wrote ;

What the hell is this video. Damn we don’t have child protective services in this country for real.

Watch the video culled from YabaLeftOnline below;

Bride, 33, fights for her life after suffering heart attack during her wedding in Israel