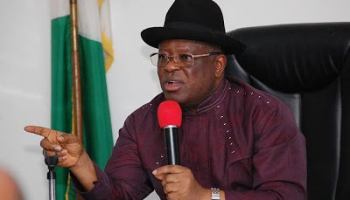 Governor David Umahi of Ebonyi State has approved the dismissal of members of the State Executive Council on Friday, according to the Secretary to the State Government (SSG) Kenneth Ugbala.

Announcing the dissolution on Friday in a meeting of the council in Abakaliki, Ugbala noted that the decision is to enable the government to carry out an appraisal of their performances.

At least 23 key officers out of the 106 members of the council were not affected by the first phase of the dissolution while 83 were affected.

Others are Commissioner for Road Infrastructure Concession, Nweze Kings, and his counterpart in charge of Works, Ogbonnaya Obasi as well as the SSA on Welfare and Religious Matters, Rev Fr Abraham Nwali are also to remain.

Meanwhile, Ugbala noted that the affected members can still return after the completion of the appraisal.