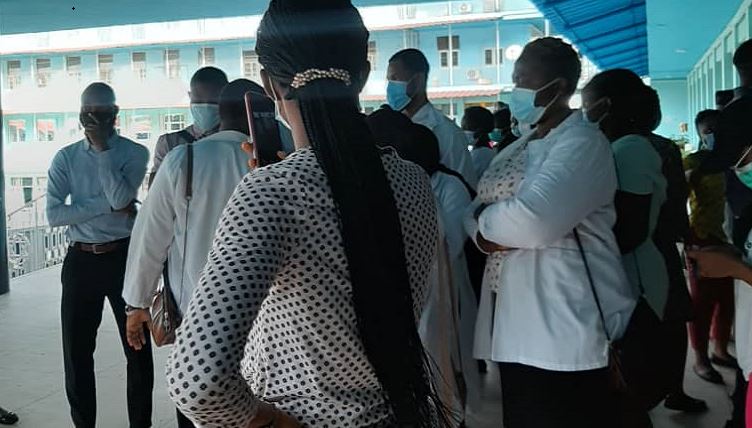 Medical interns at the University College Hospital in Ibadan, Oyo State, have disclosed that the management is threatening to take a measure of extended work-without-pay against them for protesting random reductions and delays in their monthly salaries.

FIJ reported that for nearly three weeks, over hundreds of UCH interns have protested non-payment of their salaries, which they claimed is affecting work conditions.

Among other things, the interns accused the hospital management of short-paying them, adding that the handouts being given to them are different from what the Federal Government had disbursed.

According to a source, intern pharmacists and intern nurses, who ought to be paid N128,000 and N99,000 respectively, have been subjected to marginal pay cuts since January.

The source also disclosed that the interns met with the management team comprising the chief medical director and director of administration on May 4.

He, however, said the meeting hit a rock and did not go as planned.

“We were simply told that there has not been much money available since the federal government asked the hospitals to switch their mode from GIFMI to IPPIS,” he said.

After the interns’ social media protest on Thursday, they were surprisingly credited with their March and April outstanding salaries, although by at least a 50 percent cut.

“How come the same management that told us there was no money could pay us that same night our social media campaign went viral?” another intern asked.

“I can categorically say that none of us in the Nursing department has been captured for IPPIS but the last two payments reflected that our payment came through that means. The management’s attitude has shown that if we don’t tweet, they won’t pay. We also suspect some corruption on their part. Therefore, we have decided that until they pay the remainder on our slashed salaries, we won’t stop protesting”.

With the newly introduced Integrated Payroll and Personnel Information System, one will expect that UCH staff and interns would receive remuneration directly in their accounts, unlike the Government Integrated Financial Management Information, which allows the management to pay them from the government’s reimbursement.

Meanwhile, UCH’s Director of Pharmaceutical Services, Professor Adeyinka Ishola, has been caught on an audio clip ranting and threatening some of the interns with an extension of their programme without pay over their protests on social media.

“We are really disappointed in you. We even pet you but you went on social media and said very awful words.

“Workers don’t behave like students and if you decide to behave as such, we will treat you as such.”

“For every action, there is a consequence and the consequence of this could be an extension of internship without pay and that would be mandatory. If the management says I should extend your internship, there is nothing you can do.

“I don’t think where employees abuse employers… you ended painting us black. We are really disappointed in you and  I am going to state in your recommendation letters that you are good but your set is rebellious. You  are making it difficult for us to manage you. They gave you 50 percent you are getting angry when some are even begging outside to come in and earn that same half.

“The management has seen your tweets and if they give you queries, I will attach the queries to your recommendation letter and you go back to show your parents at home that you have become very rebellious for not subjecting yourselves to constituted authorities,” he ranted.

When contacted to confirm the allegation, Ishola didn’t answer his call or respond to the text message sent.

He insisted on having a physical meeting with our reporter before making comments on the issue.

Ghanaian doctor accuses colleague of poisoning his water with HIV