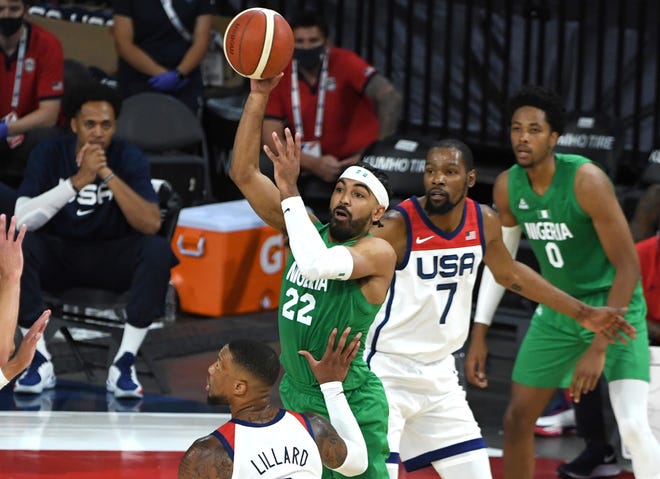 US Basketball coach, Gregg Popovich, has claimed the surprise loss to Nigeria’s D’Tigers in a pre-Tokyo 2020  exhibition match yesterday could be a blessing in disguise as his side seek a seventh gold medal at the quadrennial games.

Nigeria ran out 90-87 winners in Las Vegas to cause one of the biggest upsets in the history of the sport to condemn the Americans to their first defeat to an African nation.

However, “I thought that the Nigerian team played very physically, did a great job in that regard, and knocked down a lot of 3s,” Popovich acknowledged the quality of the Mike Brown-tutored D’Tigers. “Give them credit.

“That’s a talented group of players. It’s not a bunch of people off the street playing basketball.

“Every year, teams are better and better, and every year, one or two or three more NBA players are on their teams, so they’re a quality team.”

The Nation reports that the star-studded American team had beaten Nigeria 156-73 at the 2012 Olympics in London before recording a 110-66 win over the African side in an exhibition prior to Rio 2016.

Nigeria, led by NBA side Golden Warriors’ coach Mike Brown, were in superb scoring form as they netted 20 three-pointers on their way to the upset victory.

Gabe Vincent of Miami Heat in the NBA led Nigeria with 21 points (6 of 8 on 3-pointers) believes the team is made up of new and hungry young men hoping to represent the continent at Tokyo.

“Mike’s done a great job with us so far,” Vincent said. “We’ve had a great camp so far. We had to build a new culture, start from the ground up, new plays, new everything. We’ve got a lot of new guys in.

“It’s different when you’re playing for a country. Right now we’re representing the continent. It means the world to us and I hope we showed it here tonight.”

Nigeria will today in Las Vegas take on Argentina in another warm-up match.