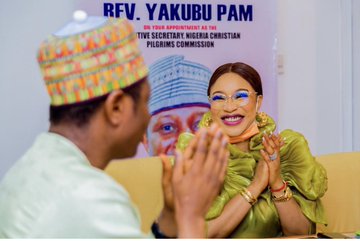 Nollywood actress, Tonto Dike has reacted to the report debunking her alleged appointment as an Ambassador of Peace for the Nigeria Christian Pilgrims Commission NCPC.

Dike who took to social media to announce the appointment was left shocked by a press statement from the commission, debunking the statement.

“We are suddenly inundated with claims from King Tonto Dikeh herself that she has been officially appointed as Ambassador of peace by this great Commission. This claim has gone viral in the media.

“The Commission frowns at this claim which is a clear misrepresentation of what transpired.” the NCPC statement read partly.

Reacting to the statement on her verified Instagram handle, Dike revealed that she has video evidence to back her claim but will take the fall to respect the commission’s decision.

“There are video proofs, but I would Rather respect the commission’s decision And take the Fall. Thanks to every Christian body that fought against this Growth,” she said.