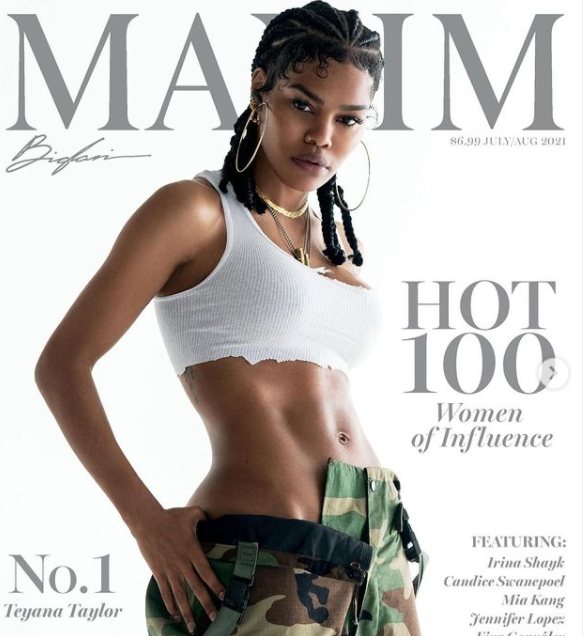 American singer and choreographer, Teyana Taylor, has been crowned the sexiest woman in the world by Maxim magazine.

The multi-talented mum-of-two covered Maxim magazine after emerging number one on its sexiest-woman-alive list.

Thirty-year-old Teyana showcased ample abs in a pair of low-slung camo trousers and a torn white vest, teamed with gold hoops and necklaces.

MORE READING!  #BBNaija reunion: I fell out with Dorathy because of Ozo – Nengi

However, some of the styling for the shoot was rather impromptu, as photographer Gilles Bensimon decided to shoot Teyana in the sweatpants, army jacket and beanie hat that she showed up in, UK Metro reports.

Sharing photos from the shoot, the Coming 2 America star wrote on Instagram:

“Somebody pinch me!!!! Maxim Hot 100 to be named the ‘Sexiest Woman alive’ by literally living in the skin I’m in. WOW….Stepping back in front of the lens has been a journey of self-reflection and self-confidence. Living up to name and title of this shoot wholeheartedly made me nervous.”