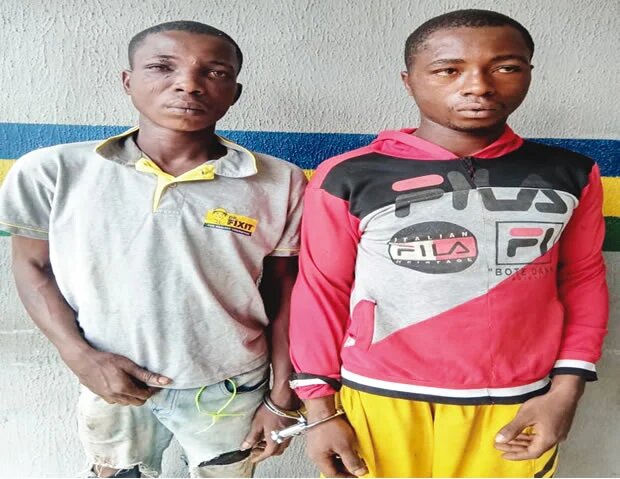 The Lagos Police Command announced that it has apprehended two robbery suspects, Tunji Lawal and lkechukwu Oguawai, for allegedly attacking Amuwo Odofin Senior Grammar School in the Agboju area of the state.

The hoodlums reportedly scaled the school fence and launched an attack on innocent parents and guardians.

While the attack was ongoing, students were said to be writing their common entrance examination in the school hall on Saturday.

PUNCH reported that the suspects were armed with weapons with which they attacked the parents, guardians and other yet-to-be-identified persons on the premises of the school.

During the attack, it was learnt that a distress call was made to the Satellite Police Division and policemen were mobilised to the scene of the incident.

When contacted, State Police Public Relations Officer, Muyiwa Adejobi, disclosed that operatives sent to the scene prevented the hoodlums from disrupting the examination.

Adejobi confirmed the arrest of the two, adding that efforts were on to arrest other fleeing members of the gang.

“The armed men had attacked with weapons some of the parents and guardians, who accompanied their children and wards to the venue of the examination, but the anti-crime patrol team stationed at the examination venue responded swiftly and arrested two of the suspected robbers, while the others took to their heels.

“The suspects are Tunji Lawal, 22, and lkechukwu Oguawai, 22, both of no fixed address. The Commissioner of Police, Lagos State, Hakeem Odumosu, has directed that the suspects be transferred to the command’s Special Squad, Ikeja, for proper investigation and possible prosecution, while the fleeing members of the robbery gang should be apprehended.

“The police boss reassured members of the general public of adequate security of lives and property and public safety in Lagos State as he pledged constant security at all schools and colleges in the state.”