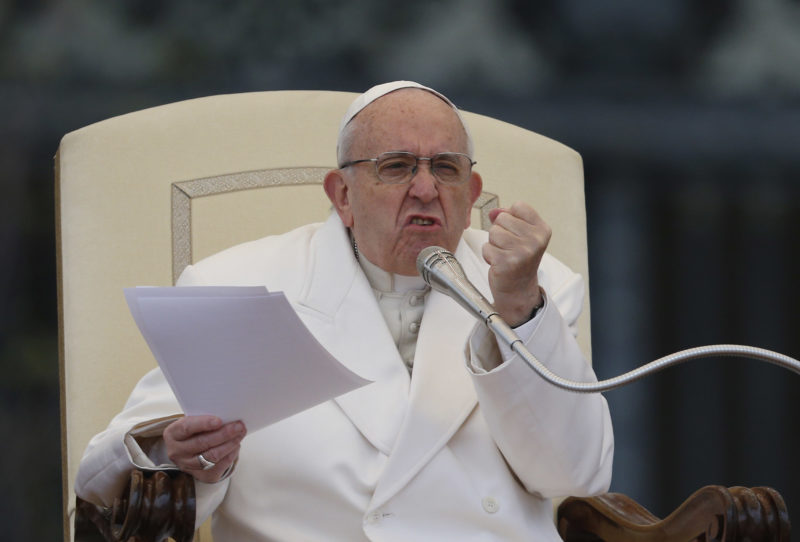 The head of the Catholic Church, Pope Francis, has slammed those engaging in the “reprehensible” trade of human trafficking and their customers.

The Pope made his comments in a preface of a new book, “Io Sono Joy” (“I am Joy”), by Mariapia Bonanate, which tells the story of one of these victims: a girl from Nigeria who hopes to go to Italy to find a job but ends up being trafficked.

Quoting the International Labour Organization, the Catholic News Agency (CNA) reported that human trafficking is estimated to be a $150 billion industry that profits off of 25 million victims worldwide.

It is on that premise that the accepted the invitation to write a preface for the book “with the specific intention of delivering Joy’s testimony to readers as a ‘heritage of humanity.’”

The Pope’s preface published by L’Osservatore Romano on Jan. 21, reads:

“The crossing of the desert, the months spent in the Libyan detention camps, the journey at sea, during which she was saved from the shipwreck … Joy’s is a story that unites many other people, like her, kidnapped in an infernal chain and struck by the tragedy of the invisibility of trafficking. A story as unknown as it is omnipresent in our globalized societies,” he said.

The pope said that traffickers were “unscrupulous individuals who thrive on the misfortunes of others [and] take advantage of people’s desperation to subjugate them to their power.” But he also had a message for consumers who sustain human trafficking.

Pope Francis wrote: “At this point, I cannot help but ask the reader a question: since there are countless young women, victims of trafficking, who end up on the streets of our cities, how much does this reprehensible reality derive from the fact that many men, here, require these ‘services’ and show themselves willing to buy another person, annihilating her in her inalienable dignity?”

He continued: “In reading this memorial we are led to discover, page after page, how much Joy’s testimony nails us before the prejudices and responsibilities that make us conniving actors in these events.”

“It will do us good to stand beside Joy and stop with her on her ‘places’ of helpless and innocent pain. After stopping there, it will be impossible to remain indifferent when we hear about the boats adrift, ignored and even rejected from our shores. Joy was on one of them.”

The pope thanked “all the people and organizations who, even at the cost of their safety, help the victims of today’s slavery.”

MORE READING!  No woman deserves to be boxed into a corner - Actress Mercy Macjoe

The pope also thanked Joy for sharing the testimony of “her via crucis” (way of the cross) and allowing people to share her “experience of absolute courage that allows us to better understand those who suffer from trafficking.”

He wrote: “‘Your name is Joy,’ you have been the joy of your mother since you were in the womb, and so you received from her this beautiful name which is also one of the proper names of God.”

“Io sono Joy” will be published in Italian by Edizioni San Paolo on Jan. 27.