Residents of the Oyorokotor fishing settlement in Andoni Local Government Area of Rivers State are in a state of excitement after a fisherman in the community caught a giant swordfish on Friday, 5 March 2020.

Photos of the catch, which has gone viral on social media, showed a crowd gathered around the highly predatory animal.

According to Wikipedia, Swordfish, also known as broadbills in some countries, are large, highly migratory, predatory fish characterized by a long, flat, pointed bill. They are elongated, round-bodied, and lose all teeth and scales by adulthood. 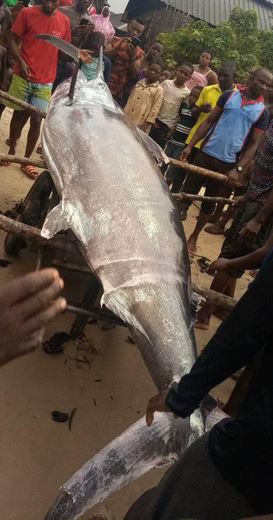 Meanwhile in Indonesia, a fisherman found a mutant baby shark with a human face.

The man identified as Abdullah Nuren found three pups inside a mother shark and noticed one of them was deformed, He has preserved the mutant pup as he believes it will bring him good luck.

He was left baffled when he cut open a shark to find an odd-looking pup with an uncanny human-like face.

Abdullah Nuren, 48, accidentally caught the apex predator while he was out fishing off the island of Rote Ndao in East Nusa Tenggara province of Indonesia on Sunday, February 21.