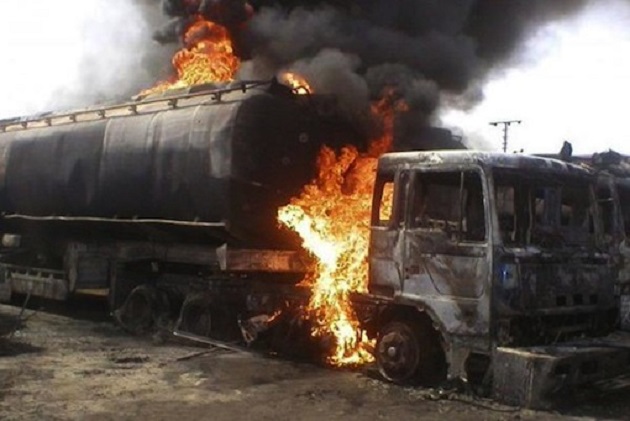 A petrol-laden Mack tanker, parked by the roadside along Onitsha/Awka Expressway, on Friday morning went up in flames.

The fire was suspected to have originated from battery spark.

“Today 17/01/2020 at about 02:am, a Mack tanker loaded with Premium motor spirit (PMS) parked by the roadside along Onitsha/Awka Expressway by Vin Oil Filling Station, Onitsha went up in flames,” he said.

Mohammed said the scene was immediately cordoned off and traffic diverted to a safer route to avert more calamity.

“Meanwhile, the situation has been brought under control and obstruction cleared to enable free flow of traffic in the Area. The fire was put off at about 03:30 am,” he said.

He explained the cause of the fire is yet to be ascertained, adding that the truck’s overcharged battery was suspected.

He also said that no lost of life or injury was recorded during the incident.

The police image maker said the Commissioner of Police CP John B.Abang, has ordered for a discreet investigation to ascertain circumstances surrounding the incident.