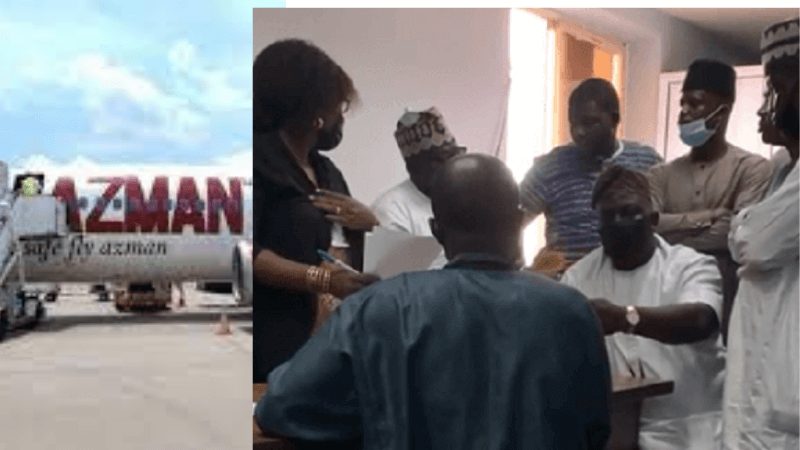 A Kano-based airline, Azman Air, left its customers fuming after it reportedly oversold tickets for a flight to Maiduguri, Borno State capital, leaving its passengers stranded on Friday.

Reports revealed that after discovering that the tickets for the 12pm flight from the Nnamdi Azikiwe International Airport, Abuja, was oversold, the airline closed the counter over an hour before the take-off.

Dissatisfied with the service, the passengers began protesting while the airline manager was nowhere to be found to give necessary information on the delay, according to the Whistle.

“What happened yesterday we came to the airport at the right time around 10:30am. They were supposed to close the counter about 30 minutes to departure, but they closed the counter since 10:30 and when we talked to them, their staff ignored us. When you talk to them they will look at you mute,” the leader of the affected customers explained on phone.

“I was even shivering and they saw me shaking; my hands were shaking,” she said, adding they acted with “no remorse at all.”

“That was how we started protesting and those guys (Passengers) entered the counter and insisted that none of the staff will use their system to issue tickets to anybody. That was how we blocked everywhere and they started talking to us,” she narrated.

The customer said the Azman’s manager came hours later after FAAN staff took them to a separate section.

“They went to negotiate with us. We waited for an hour and they asked us to write our names. Maybe they tricked us upstairs so that they can issue tickets for Kano and the rest.

Another passenger (name withheld) also corroborated the first passenger’s account of the story while responding to questions on the delay.

“Yesterday we were called, the manager of the Federal Airport Authority, the representative of the Consumer Protection Council we met, we agreed and they acknowledged they overbooked the flight and the manager apologised to all of us,” said Mustapha, another affected passenger.

“Azman airline oversold ticket and the flight did not show up. They closed the counter 30 minutes before the time,” another passenger lamented.

“Azman airline oversold ticket deprived us to enter the flight. We were at the airport since 11 am but the staff defrauded us,” another customer name withheld said.
0000
“I am at the airport now. They promised to pick me today and they have still not picked me,’ Mustapha said by 10:59am on Saturday.