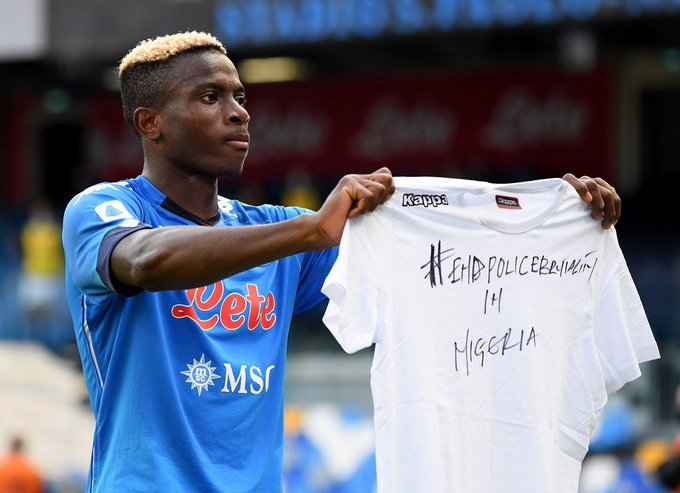 Super Eagles striker, Victor Osimhen has celebrated his first Serie A goal for Napoli with a shirt carrying the #EndPOliceBrutality in Nigeria shirt.

Osimhen who got on the scoresheet for Napoli in the 43rd minute raised out the shirt to show support for the protests correctly rocking the country.

The #EndSARS protests have gone on for more than a week, home and abroad, as citizens call for an end to police brutality in the country.

The striker is the latest to join the campaign after the likes of Odion Ighalo of Manchester United, Kelechi Iheanacho of Leicester City and Leon Balogun amongst others.

Napoli paid French club Lille a club record fee of up to 80 million euros ($94.6 million) to bring Nigeria forward to southern Italy on a five-year deal.

Mexican forward Lozano scored two quick-fire goals in the first half, having also picked up a brace in Napoli’s previous completed match — a 6-0 win over Genoa also at the San Paolo Stadium.

Matteo Politano blasted in a third after half an hour with Victor Osimhen grabbing his first Napoli goal just before the break.

Osimhen held up a t-shirt after his debut goal on which was written “End Police Brutality in Nigeria” as protests against law enforcement violence continue in his home country.

Related Topics:#EndPoliceBrutality#EndSARSFeaturedVictor Osimhen
Up Next