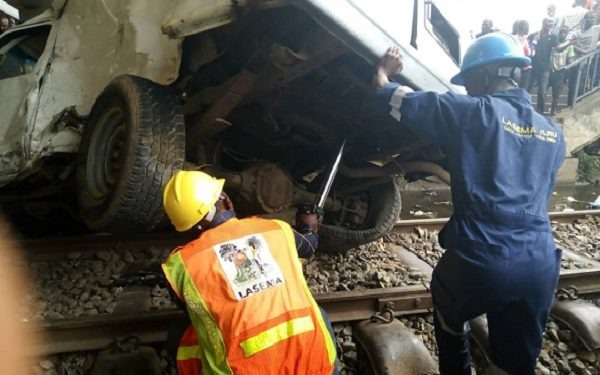 Nigerians on social media have reacted to the news of a train ramming into a commercial bus in Oshodi Area of Lagos State on Monday.

The news of the incident which almost took the life of no fewer than eight people was announced by the Lagos State Traffic Management Authority, LASTMA, on Twitter.

“A train ran into a Volkswagen T4 bus at the ARENA crossing, pushing it to Oshodi U-bridge. Onlookers causing more harm than good. Men on ground, Necessary Agencies,” LASTMA tweeted.

Dr Femi Oke-Osantintolu, the Director-General of Lagos State Emergency Management Agency (LASEMA), revealed that the incident which occurred around 8 a.m has been brought under control.

“The agency received distress calls on the above. Upon arrival at the scene, it was discovered that a passenger bus with registration number GGE 972 GE, had veered onto the train tracks while crossing the rail at PWD inward Oshodi, Lagos,” he said.

Below are reactions and videos gathered by WuzupNigeria.com from social media.

@kingsbenson_ wrote: “No first responders, no paramedics nothing like emergency units.
Only God and unprofessionals who happen to be at the scene. How we have survived in this kind of country, it’s like a mystery.”

@cocaineheart6 wrote: “How? Train has its own rail and I can’t imagine it moving off track just like that. I hope nobody died.”

@Venoma2 wrote: “You should clearly know that the bus must have been on the track for that to happen. Is this the first time you are hearing about this sort of thing?”

@forkebor wrote: “God help the pipo in the bus if there’s any Nigerians need to be sensitized what was a bus doing on a rail track was there no warning signs.”

A train has reportedly run into a van at Ilupeju bypass rail intersection and dragged it to Oshodi before stopping.pic.twitter.com/xjFlt0xnzq

JUST IN: Passengers escape death as train rams into bus in Lagos