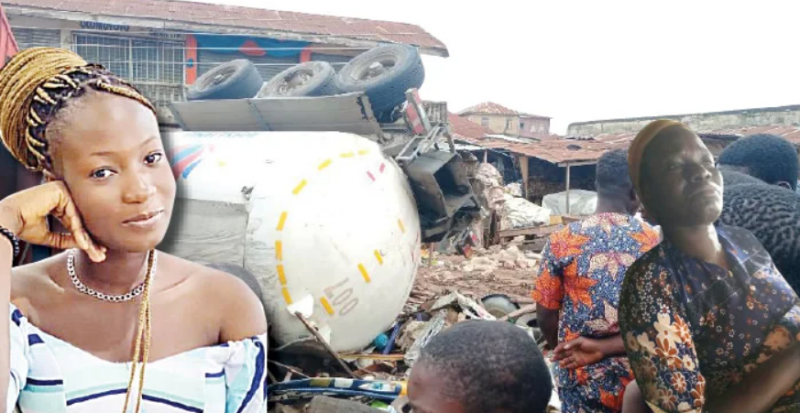 Tears flowed freely as family members, friends, neighbours and other sympathizers on Thursday thronged the residence of Alhaja Fausat Adediran to commiserate with her over the death of her daughter, Barakat.

Barakat was among those crushed to death by a tanker that suffered a brake failure and overran traders and others at Bode Market in the Molete area of Ibadan, Oyo State on Sunday.

PUNCH reports that the 24-year-old lady was said to have studied Mass Communication at The Polytechnic, Ibadan.

After completing the National Diploma programme, she enrolled in a fashion institute and completed the program with low-key graduation on May 24. She was said to have applied for a Higher National Diploma before her death.

The woman, popularly known as Iya Ijesa, looked lost in the midst of those consoling her as she prayed that God gives her the fortitude to bear the loss.

Some co-traders, family members and the bereaved mother described the deceased as hardworking and an enterprising young lady who was always ready to help her mother and family members.

The grieving mother in a brief interview said her daughter knew she was going to die but hid it from her.

However, the sympathizers said she probably would not have gone out if she knew she would die in an accident that day.

“Barakat knew she was going and that was why she told a young child that usually visited her that she would travel. But she had no intention to travel anywhere except this journey of no return on Sunday. She was such a pleasant and hard-working girl. The traditionalists at Bode Market told us that we should not open the market for seven days because they foresaw a strange happening and I complied. Barakat told me that she would go to the market to help me on that day and I should stay at home. “I was told she got to the market and was paying the motorcyclist who took her there when the truck hit her and the motorcyclist. Both of them died,” her mother said.

Meanwhile, Barakat’s brother Adegoke Fajaye, who moved into the family house to console his grieving mother, said he was told that his sister saw the truck late and ran but she was electrocuted by the electric cable which dropped immediately the tanker hit the electric pole before veering inside the market. He said she was caught in the web of the cables and was crushed by the tanker.

“She just got to the market and was paying the okada rider who took her there when she looked back and saw the truck which had lost control. She was said to have been caught in the web of electric cables that fell after the tanker hit an electric pole before crushing everybody and everything on its path into the market,” he said.

The brother said the family retrieved the corpse and buried her immediately according to Islamic rites. Asked if the owner of the tanker had reached out to the family, he replied that no one had gotten in touch with the family.

“We have left everything to God. We believe he counted us to be among the families affected by the tragedy. We cannot query God,” he added.

Friends of Barakat on her Facebook page also expressed sadness over her death.