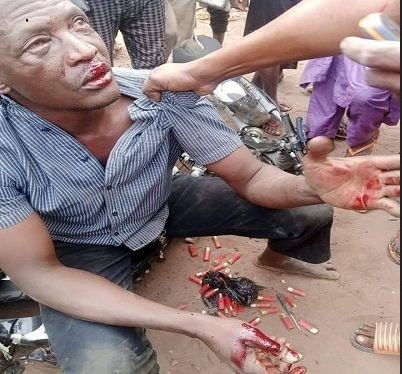 A motorcyclist identified as Garuba Sanni has been beaten to a pulp and handed over to the police after over 20 pieces of ammunition were found in his possession in Oghara, Ethiope West council area of Delta state

According to reports, Garba was involved in an accident close to Oghara Junction by the Cattle Market along the expressway. It was then sympathizers who rushed to help him discovered he had the ammunition on him.

After he was beaten up, the suspect alleged that it was one Sariki in the cattle market that sent him to buy the bullets.

The chairman of the community, Mr Eghwere, who confirmed the incident, said;

“I was in my house when one of my boys called me that they caught a man with bullets. It is like the guy was going to the cattle market. But before he entered the cattle market, by the road, the bike fell down.

“So the bullets fell, about 20 bullets. I was the one that called the police. I called the DCO to come and take the guy. They wanted to burn him. I said no, the police will go and investigate more, and know where he was taking the bullets to.

“Then he mentioned that one Sariki was the one that sent him. That was what he told me categorically. Others heard him, I was not the only one. When DCO came, we handed him over to DCO and I have not heard from him till now.”

“That one Garuba Sanni was caught in possession of ammunition. The Police swung into action and arrested him. He said somebody sent him.

The person who sent him now called the name of a woman who sells it and they recovered about 77 ammunition”.

Onovwakpoyeya added that the said “Seriki” who sent Sanni, as well as the woman who sold the bullets to him, have been arrested.