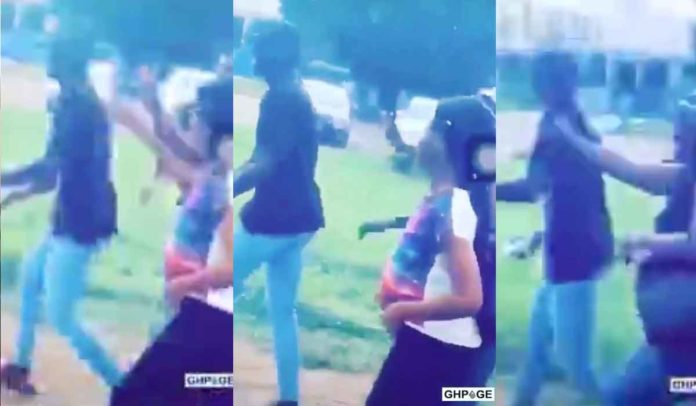 A video presently making the rounds on the internet has shown the moment a student of the University of Ghana was humiliated out of the lecture room by the mother of a lady he allegedly impregnated.

A social media user who shared the viral footage on social media claimed the mother of the lady went into the lecture hall while the youngman was receiving a lecture to drag him out.

MORE READING!  #BBNaija: Erica needs to focus on herself, no relationship between us for now - Kiddwaya

In the footage, the angry mother and her pregnant daughter were seen in the school campus.

The woman held the man and was seen pushing him amidst a large crowd of students who had gathered around them to catch a glimpse of the incident.

Other students were heard shouting and cheers. They were chanted “Weremu, weremu, weremu”, an Akan language which means “enter”, urging the woman to enter the lecture hall to apprehend the student.

The University of Ghana has been in the news consistently this week over sex-related issues.

Two lectures of the university were indicted in a BBC Africa undercover report on sexual harassment in West African universities dubbed ‘Sex for Grades’.

MORE READING!  My frog voice got me billions – Davido fired back at troll

‘Seven in 10 workers are self-employed’