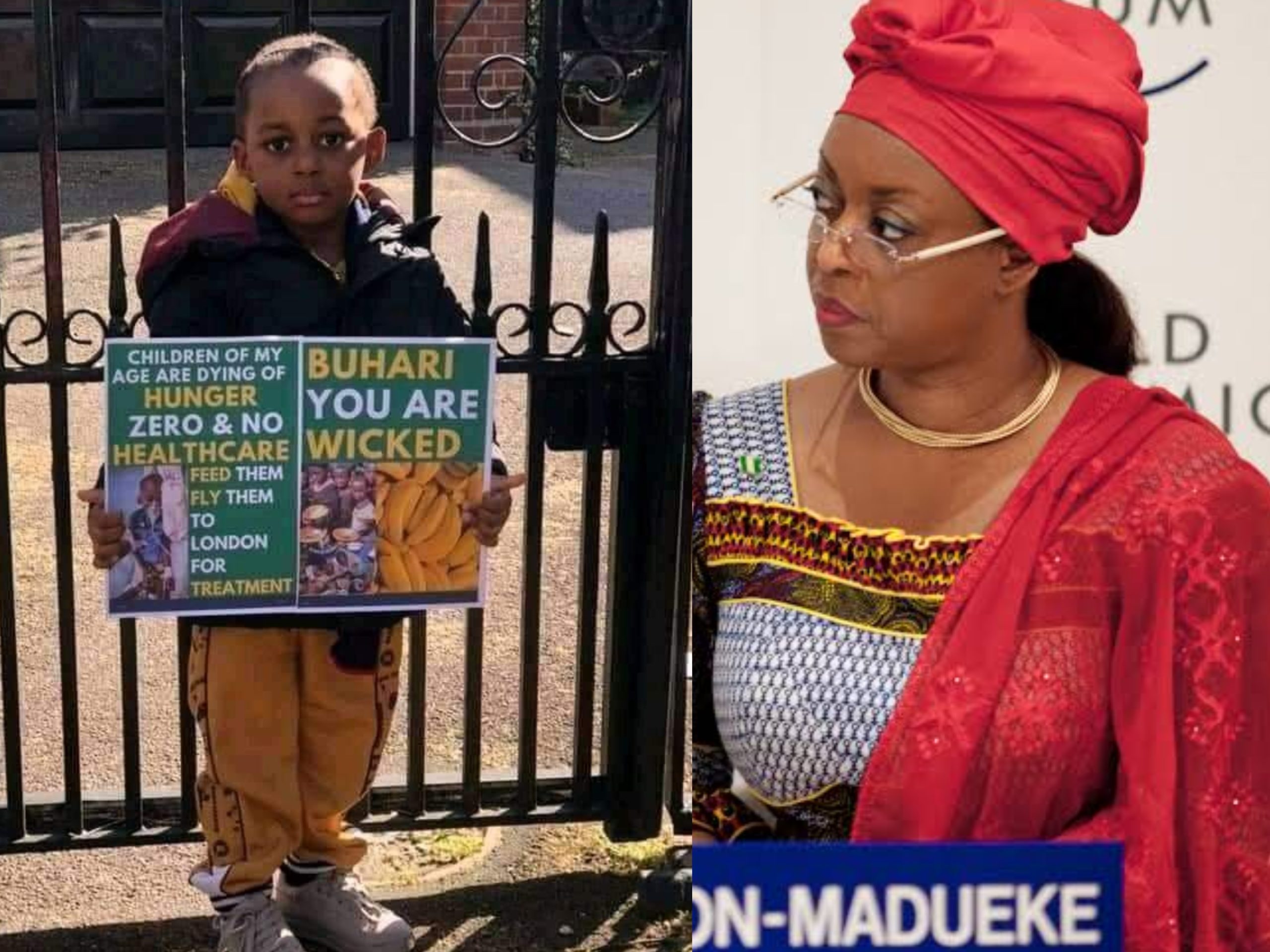 There were mixed reactions on Twitter on Sunday after a toddler, who is reportedly related to former Minister of Transportation, Diezani Alison-Madueke, was seen protesting against the President, Major General Muhammadu Buhari (retd), in London.

Recall that former presidential aide, Reno Omokri, alongside some Nigerians in diaspora,  last week staged a protest at the Abuja House in London, United Kingdom against Buhari who is on medical leave in the UK.

The young boy who is reportedly the child of Alison-Madueke’s cousin was spotted with a placard with the inscription: “Buhari you are wicked. Children of my age are dying of hunger, zero & no health care, feed them, fly then to London for treatment.”

However, days after the photo went viral, a recent revelation that he is related to Alison-Madueke has sparked outrage on the bird app.

Recall that Alison-Madueke, who also served as Ministers of Mine & Steel Development as well as Petroleum Resources, is currently on the run amidst corruption charges in Nigeria. The former Minister has been in the UK since 2015 as the Economic and Financial Crimes Commission (EFCC) investigates her for money laundering and other related charges.

The latest report revealed that Alison-Madueke became citizenship of Dominica, a Caribbean Island.  Her relationship with the Caribbean country was gotten through a diplomatic passport which reportedly prevents her from prosecution and checks by police as well as against fraud-related sanctions.

With the former Minister still at large, her relation’s protest against Buhari whose regime has been heavily criticised by many in the country due to the poor state of the economy,  insecurity, poor health care system, amidst others has left different reactions on Twitter.

One user @valiantNig wrote, “Diezani’s cousin put out his son on a London street with a ‘protest sign’ calling Buhari wicked! The same Diezani who made sure there was no 2nd Niger Bridge, railways, roads, electricity, water, hospitals, bridges, & all infrastructure needed to make life meaningful! I hate the PDP criminal organization with intense passion!”

However, @Ayodeji_tobbby rebuked those making reference to the little boy, noting that he shouldn’t pay for Diezani’s sins.

“Is Diezani cousin Diezani, so he should not have his own voice bcos of his sister. My dear friend rest,” he questioned.

In the same vein, @uncleoluwafemi advised that the protest should focus on the elected and not the appointee.

“So, we also voted Diezani like we voted Buhari, right? Remind me when Diezani asked us to vote for her please. I guess I have forgotten.

“We have the rights to hold those who asked for our votes responsible. Even if their appointees misbehave, those we voted are still to be held.”

Meanwhile, @Alabiopeyemi was critical the protesters for not protesting against Diezani who spent years in the UK since.

He wrote, “Diezani Alison-Madueke has lived in London for 6years, they couldn’t protest against her but abruptly find a voice against Buhari. ISN’T IT FUNNY?”