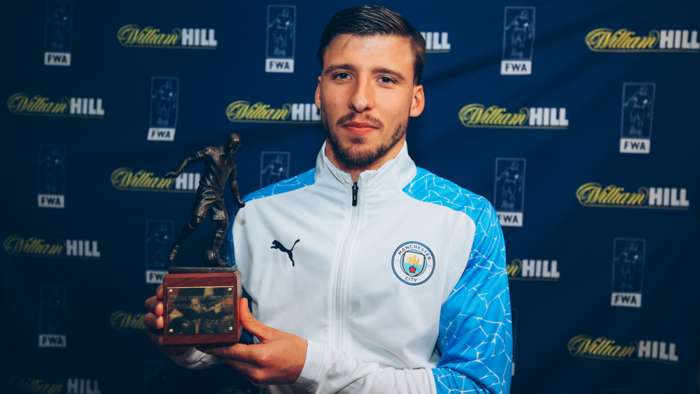 Dias who joined from Benfica last summer became the first defender to win the award since Liverpool’s Steve Nicol back in 1989.

Sky Sports reported that with one goal and 14 clean sheets in 31 appearances for Man City this season, the 24-year-old helped the Citizens to their third Premier League title in five seasons under Pep Guardiola and their fifth in the last 10.

The Portuguese was described as a “comfortable winner” by the FWA having beaten the likes of Tottenham striker Harry Kane and Dias’ Manchester City team-mate Kevin de Bruyne, according to The BBC.

Dias is only the third player to win the FWA award in his first season in English football, and the last defender to win the accolade was Liverpool’s Steve Nicol 32 years ago.

Shortly after receiving the award, the Portuguese said, “It’s a huge privilege, I’m very, very happy. I could not have done it without the success of the team, without everyone in the team deserving this award. Only by that, as a defender, am I able to be here to receive this prize.”

Dias was also thankful to his teammates, adding that the FWA award is a result of Man City’s teamwork and how they play as a family.

“It means something because normally the ones who finish off the plays get the spotlight, but me receiving this award is a major example of our team,” he explained.

“We work and build our game, it reflects the togetherness we have on the pitch. The spirit that runs through this team with these players, how we play like a family.”

UFC fighter gets Tesla after calling out CEO Musk