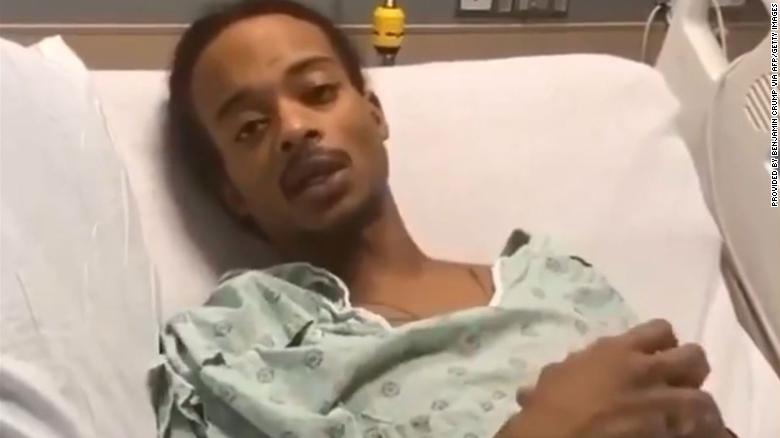 American celebrities including NBA star, Lebron James and rapper, Common, amongst others have reacted after a court refused to charge the officer who shot Jacob Blake.

Recall that Blake, a 29-year-old Black-American, was shot on August 23, 2020, by Kenosha police officer Rusten Sheskey after the cops were called over an altercation involving the victim at his girlfriend’s house.

According to Journal Sentinel, Blake’s girlfriend complained he was there in violation of a restraining order and while cops said a taser refused to contain him, he was then shot having allegedly held a knife which a neighbour who recorded the shooting said he didn’t see.

Although Blake survived the shooting, his family and attorney said the shooting left him paralyzed from the waist down after bullets pierced his abdomen, shattered some of his vertebrae and severed his spinal cord.

However, on Tuesday, Kenosha County District Attorney Michael Graveley will not charge any officers with the shooting of Jacob Blake.

Reacting to the court decision, the Time’s 2020 Athlete of the Year called the no charge verdict a “blow to the heart.”

“I’m smart enough to know that even though we are playing a game of basketball that there’s so much more going on in the world.

“So much more that’s even more important than us playing a game. To hear what happened in Kenosha today was a blow to the heart and to the gut, not only to that community but to us and to every Black person that has been a part of this process, seeing these outcomes for so long,” James said Tuesday after his Los Angeles Lakers won 94-92 over the Memphis Grizzlies.

“To hear what happened in Kenosha today was a blow to the heart and to the gut. … We gotta continue to stay strong and continue to believe in each other.”

LeBron James spoke on prosecutors not filing criminal charges against police officers in the shooting of Jacob Blake. pic.twitter.com/h9RzhgsvcX

“An unjust law is no law at all.” Dr. Martin Luther King Jr. https://t.co/OOMZJUrRZB

Not charging the officer who shot Jacob Blake is a green light for police across the country to continue devaluing, dehumanizing, and destroying Black lives.

Everyone is on the edge of their seats as the future of our democracy hinges on how black folks have voted…the same day that no charges were brought to the officer who shot Jacob Blake in the back 7 times. This is on my mind.

Today’s decision to not prosecute the officer who shot Jacob Blake 7 times because he feared for his life is inexplicable. 1) once would disable any threat, 2) in the back means Blake was no threat, 3) if officer was afraid, he’s in the wrong business. Police reform essential.

#mubb to wear Black uniforms tonight in support of Jacob Blake, his family and the Kenosha community. #BlackLivesMatter pic.twitter.com/Z53K6dUJSI