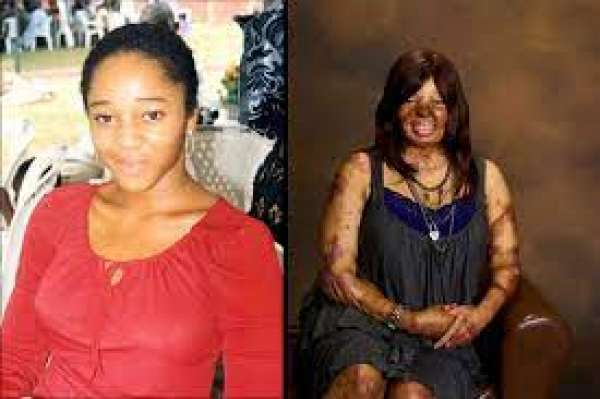 Singer and motivational speaker,  Kechi Okwuchi, has expressed gratitude to God for the recovery journey of her facial scars, saying she knows that true progress and genuine growth cannot happen overnight.

The 31-year-old, who is one of two survivors in the ill-fated Sosoliso Airlines Flight 1145 crash of December 10, 2005, disclosed this on her Instagram page @kechiofficial.

She shared the odyssey of her recovery journey, which has spanned 14 years.

According to her, she is grateful to live long enough to see the speedy recovery of her facial scars.

The ‘America Got Talent’ finalist, sharing a photo from 2007, a year after the tragic crash, with the recent one she took on Tuesday, July 20, said she was grateful to God for being alive to witness her progress.

“Wonder if I should tag this as sensitive content? I stumbled upon the picture on the left on my laptop a couple months ago, and I have been contemplating this post since then,”

“I remember I stared at it for a long time that day. Time makes me forget just how extensive my burn injuries were, and how devastating the effects were to my body.

“The pic on the left was taken a good year after the plane crash and by then, intense scar tissue had formed, especially on my face.

“I took the pic on the right a few mins ago and made these before/afters, and I marvel at how far God has brought me.

“ I am the result of the hard work of multiple surgeons He brought into my life, nurses, physiotherapists, and love and care from my family, my mom especially.

“This is what progress looks like, guys. 2 pictures, 14 years apart. I’m grateful that I lived long enough to see it.”

According to her, the decision to make the post is for people to marvel at God with her.

“ I want someone who reads this to see that true progress, genuine growth, and lasting change cannot happen overnight.

“Most of the time during the journey, maybe like me, you won’t notice changes because day by day they’re too minuscule to make a difference.

“But if you give yourself a fighting chance, if you find the right kind of support on your journey, one day, definitely one day, you will look back like I did this morning and hopefully…you will smile.

“I heard this in a song and it stuck with me: The night will definitely come. But so will the morning,” she wrote.

The News Agency of Nigeria reports that Okwuchi, who survived the December 10, 2021 ill-fated plane crash, had sustained third-degree burns over 65 per cent of her body and was given a 30 per cent chance of survival.

Okwuchi and 60 of her classmates had boarded the plane to go home for Christmas from their boarding school in Abuja, Nigeria.
There were a total of 109 people on board the Sosoliso Airlines Flight 1145 including the flight crew.
The crash killed 107 people on board, leaving only two survivors including Okwuchi. All of her classmates perished, leaving her the lone student survivor.

She has undergone over  100  reconstructive surgeries since the tragic crash that claimed  59 of  her school mates at the Loyola Jesuit College, Abuja