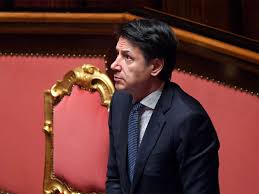 Following a breakdown of government alliances, the Italian Prime Minister Giuseppe Conte’s political future is at stake as he faces a vote of confidence in the larger chamber of parliament on Monday.

If he survives the vote in the Chamber of Deputies, the next hurdle awaits him on Tuesday, another vote in the Senate, the smaller chamber.

The 56-year-old needs the approval of both chambers to pass the vote, if he fails to win the vote, his administration could be forced out of office.

Conte’s problems were sparked by the decision of the Italia Viva party of former Prime Minister Matteo Renzi to withdraw from the ruling coalition, robbing it of a majority.

Renzi has butted heads with Conte in a fight over the best way to use EU funds being sent to Italy to help it deal with the economic shocks of the Coronavirus pandemic.

Renzi wants more investments in the healthy system and for the government to seek to access more emergency funding.

Viva Italia only had two ministers in the governing coalition, but their departure is enough to rob it of a majority.

If Conte cannot find another partner for his centre-left alliance or work out a deal with Renzi, new elections loom, which could be favourable to the country’s right-wing populists.

However, there is also hope Conte could cobble together a new coalition, his third since taking office in 2018, or find a way to forge a government of national unity.

Voting is expected to begin after Conte’s midday address.