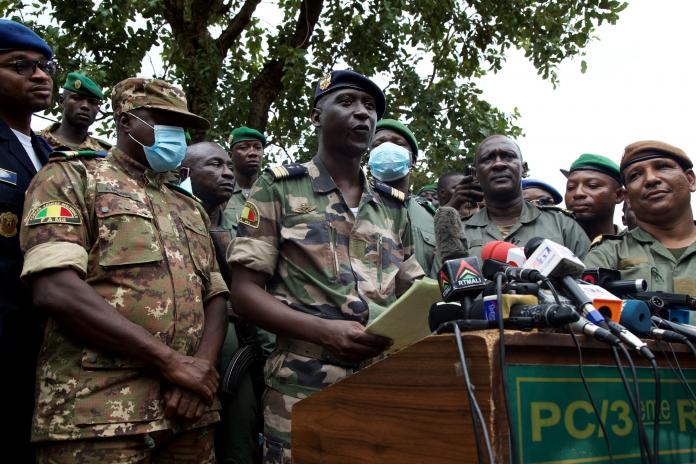 Mr. Rotimi Benjamin, the Coordinator of IHRC, Nigerian Committee, spoke in an interview with the Newmen on Sunday in Lagos.
Newsmen reports that the rebel soldiers had on Aug. 18 overthrown President Ibrahim Keita-led government.
The development had dealt a big blow to a country already struggling with brutal Islamist insurgency and widespread public discontent over its government.
Newsmen also report that on Aug. 22, West African leaders arrived in Mali to try and push for a speedy return to civil rule after the coup.
The delegation, headed by former Nigerian President Goodluck Jonathan, was planning to meet members of the new junta, as well as the ousted President Ibrahim Keita.
Benjamin said military coup in the 21st century was uncivilized and unacceptable.
“This is totally rejected; you can not take away the rights of people to elect their leaders by the use of military power.
“Military Coup does not depict an uncivilized way of changing power;  people’s representatives can pass a vote of no confidence and elect a new leader thereafter, through democracy.
“African leaders must live up to the expectations by providing good governance that will take away the sufferings of the citizens,” he said.
Benjamin called on people of Mali to reject the juntas and force them to barracks, where they belonged.
“A corrupt democratic government is far better than the military government; people should organize mass protests against the military rule.
“If you are having a sit-tight leadership, the best way to handle it is to protest while their representatives pass a vote of no confidence,  not through a military coup.
“Bad leadership does not call for military action, rather people’s protest which shows rejections.
“African leaders must learn to respect the wish of people and must learn to respect their country’s Constitution,” he said.
Benjamin also called on African leaders in Bamako to persuade the juntas to release the democratically elected government and ensure normalcy was restored in the country.
“This must be condemned in its entirety, two wrongs can not make a right.
“African leaders, through the African Union, must be the watchdog on others. They must force the juntas to hand over power to the people’s representatives,” he said.
MORE READING!  Nigeria among countries to be affected by Trump's proposed two-year student visa
Related Topics:human rightsMali
Up Next

Why we won’t call off strike – ASUU