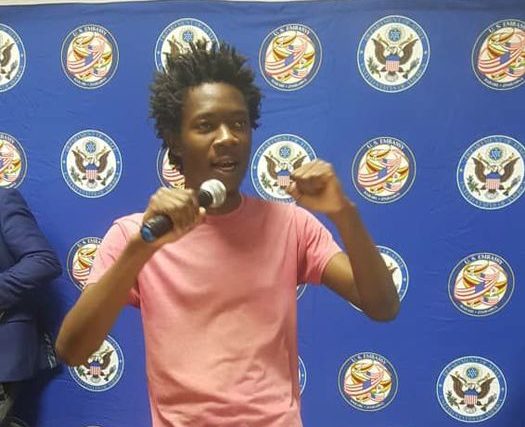 Twitter users have called for the release of Allan Moyo, a University of Zimbabwe (UZ) student who has been in prison for more than 40 days.

According to reports, Moyo was arrested on December 7, 2020, and charged with inciting people to commit public violence, coming after he allegedly called for a revolt against President Emmerson Mnangagwa’s government.

Local media reports that the state alleged that Moyo, on July 3, incited some commuters at Copacabana bus terminus in Harare by telling them that the time to stage a revolt against President Mnangagwa’s administration in Zimbabwe was conducive.

This is the only reason why Alan Moyo is in jail right now .kurwira Zimbabwe yakanaka pic.twitter.com/D19QxZjxSe

The 23-year-old who has since denied the charges levelled against him with the magistrate court denying him bail pending trial.

Reacting to the situation on Twitter, Zimbabweans have called on the state to free Moyo by granting his lawyer’s bail application.

Today the High Court postponed Allan Moyo ‘s bail hearing to Friday. The state is doing delaying tactics just to keep him locked up. Bail is a human and constitutional right for everyone pending trial. He has been in prison for nearly 2 months. #FreeAllanNow #NoToAbductions pic.twitter.com/Dtq5oiz9kb

There is a Covid crisis in prisons. It’s unconscionable that student #FreeAlanMoyo #freehopewell & #freejobsikhala have been deliberately exposed to Covid.

There is a humanitarian intervention needed to save lives of those persecuted by the system. They are innocent. pic.twitter.com/8N109BrgKM

In the prison & outside, young Joseph found favor in the eyes of the Lord and man. May you continue finding favor that you may keep safe.Just like Joseph, upon your release; may you be restored to your rightful position, stronger & determined. Keeping you in prayers#FreeAlanMoyo pic.twitter.com/vS1i1dMMv8

Tonight, I pray a special prayer for Allan Moyo, Hopewell Chin’ono & Job Sikhala. The political persecution of Govt critics must end. It’s not a crime to want a better society. It’s not an offence to speak truth to power. May the chains that oppress them & all of us fall soon.??

Alan Moyo a student has been in prison for 2 months for highlighting the hardships faced by students & Zimbos in general.

While the courts are busy the economy & health systems are dead. There is no plan for Covid, people are dying & they are still persecuting.#FreeAlanMoyo pic.twitter.com/fg14Ko4vx4

The incarceration of Alan Moyo is unjust, unconstitutional and an unnecessary waste of taxpayers money which could be used in the necessary fight against COVID-19 #FreeAlanMoyo https://t.co/nblNnXGjGf

Alan Moyo’s bail application was supposed to be heard today, however the state had “preliminary objections” so the Court was adjourned to Friday. Meanwhile Alan remains inside prison thanks to a system that is determined to keep him locked away. #FreeAlanMoyoNow pic.twitter.com/dJDavlHNIm

Alan has spent 2 months in prison. Alan is a student leader whose only desire is to make sure that Zimbabwe is fixed so that his generation may not inherit problems that are not of their own making. Stop pre-trial unlawful detentions! It’s criminal. #FreeAlanMoyo pic.twitter.com/SBh2GWGzfC

The arrest of students union leaders clearly shows that democracy is void in Zimbabwe everyone has a right to utter his/her views.Alan is innocent he is fighting for democracy & bright future therefore we want him to be released #FreeAlanMoyo pic.twitter.com/ZyzM6NjmSv

#FreeAlanMoyo .
We are fighting for a time when we will embrace diversity & for those who think differently. It is possible in our generation. Politics of hate, torture, intolerance, fear should be a thing of the past. His only crime was Speaking Out. Cry my beloved Homeland https://t.co/e9dapCapOC

MORE READING!  Nigerian in diaspora pays off mum’s debts 18 months after she funded his startup
Related Topics:Allan Moyo
Up Next