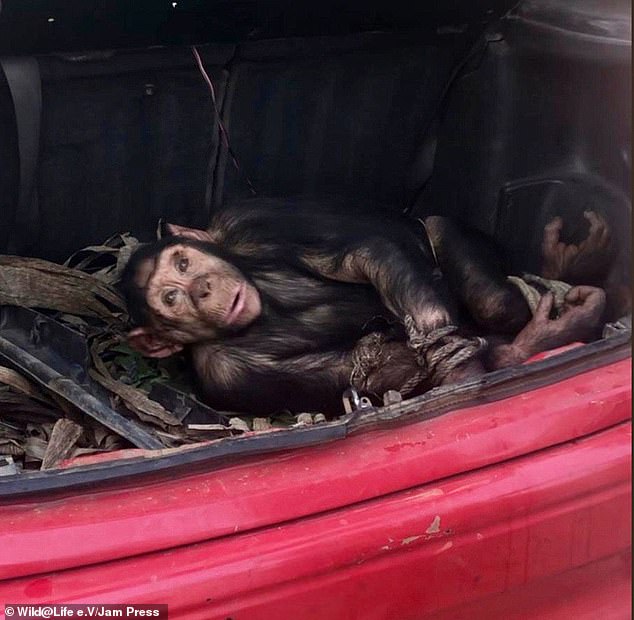 A female chimpanzee which was rescued from the boot of the car of wildlife poachers in Angola has died after spending 11 days receiving treatment in a care center.

The female chimp who was slowly regaining her appetite as workers tried to treat her wounds died from from septic shock after she contacted tetanus from the snare.

Bound hands and feet, her captors had reportedly beaten her with a metal rod and was so badly injured that two of her fingers had to be amputated, a staff from charity [email protected], based in Germany, said.

She was named Caita by animal worker who discovered her in the trunk of the poacher.

‘We could not believe our eyes when they met with the situation in front of us,’ the spokesman said.

‘A female chimpanzee was tied up by her wrists and feet by thick ropes, her fingers were hanging off and she was in a great deal of pain and distress.

‘She had been caught in a rusty snare, and her family murdered in front of her – they were to be sold for bushmeat.

‘The two Poachers struck her across her back with an iron pipe, tied her up and threw her in the trunk of a car.’

It is not known how long Caita was held in the trunk of that car, or whether she was to be sold alive or killed and cut up a part of the trade in animal parts.

Chimpanzees are often eaten as bushmeat, while their bones, blood, organs, and other body parts are used in various traditional medicines.

The two poachers have since been jailed for wildlife crimes.  (DailyMail)