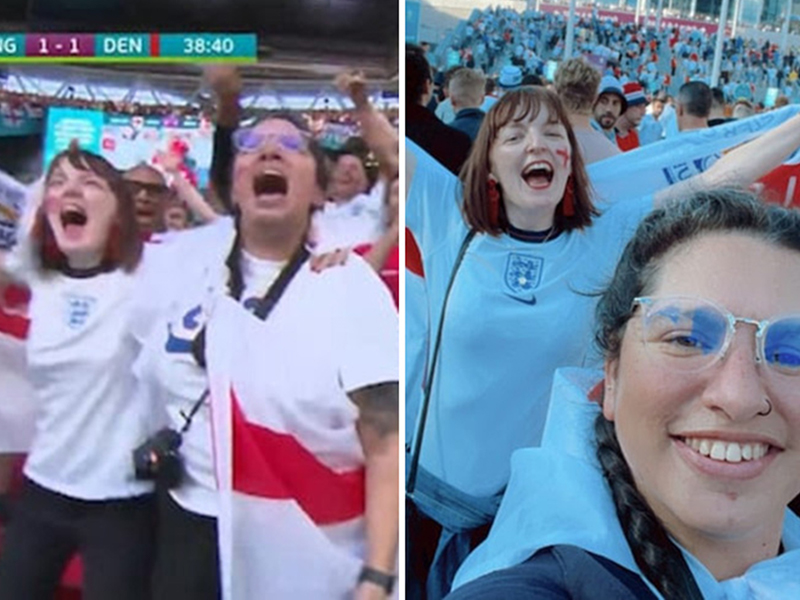 A digital content producer, Nina Farooqi, has been fired from her job after her boss caught her live on TV watching England’s semifinal victory against Denmark at the EURO 2020 in Wembley on Wednesday.

UK Sun reports that Farooqi, 37, called in sick at work to attend the tensed Semifinal at Wembley and she almost made it through without being caught until Harry Kane scored the winning goal at extra time.

Farooqi who was wrapped in an England flag around her seated right behind the goal at Wembley had managed to evade the cameras but her celebration couldn’t have gone unnoticed and the cameras caught her and her friend jumping and screaming after the ball hit the back of the net.

England pulled through to the final but for Farooqi, her job was left behind in the semis when her boss called her the morning after to fire her for going to the historic game.

Speaking to The Telegraph, Nina said: “It’s mixed emotions: we’re through to the final, I’m still on that high, but I’ve also lost my job.

“My friend won the ticket in her work ballot, and knew I’d do anything to get to the game – there was no way I was going to turn it down.

“This hasn’t come around since 1996, I vividly remember crying on my mum’s sofa when Gareth Southgate missed his penalty, and the football fan in me just couldn’t do it. Football is my life.”

Knowing that it was unlikely that her work would approve her last-minute day off as they were short-staffed, Nina pulled a sickie but ended up on hot seat after realising that their seats were right behind the goal, but thought that in a crowd of 66,000 people she might get away with it.

Sadly, Farooqi’s cover was already blown at half time, when England scored their equaliser, as she checked her phone.

Nina said: “We were all over the news, my face was on every television screen across the world – I had friends from Australia and America telling me they’d seen me.

“I was even on Stacey Dooley’s Instagram story. My phone blew up. The whole world had seen me celebrating. The rational part of me thought, ‘oh no, is this going to come back to haunt me?'”

Despite rushing back to Yorkshire on the 6am train, Nina was told not to bother coming in as the bosses at her office had spotted her.

She added: “They said they’d seen I’d been at the game, and I was honest about why I did it. But I didn’t get any sympathy at all and they said that’s it.

“That’s their call and the consequence of what I did. There is a bit of regret, no one wants to get fired, but then also I would have hated the regret of missing out. I’d do it all over again.”