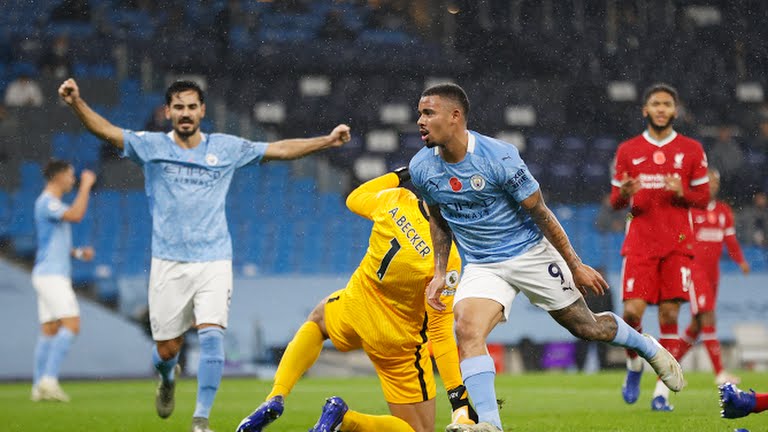 Manchester City denied Liverpool the chance to go top of the Premier League table after playing a 1-1 draw at the Etihad Stadium on Sunday night.

A win for the defending champions against the former champions would have sent them straight to the top of the log but City’s resilience favoured Leicester City who go top after defeating Wolves 1-0 at the King Power Stadium on Sunday.

Jurgen Klopp’s men took the lead in the opening moments of the game after Mohammed Salah converted a penalty in the 13th minute.

Kyle Walker’s challenge on Sadio Mane sent the Senegalese to the ground and the referee points straight to the spot.

City’s resilience paid off moments later in the first half when Kevin De Bruyne located Brazillian, Gabriel Jesus in the box, leaving him backing Liverpool’s defences.

A sleek touch from the Brazillian striker helped him beat Alexander-Arnold as he slots the ball past Alisson with his left foot, giving City the equaliser in the 31st minute with a sweet finish.

De Bruyne squandered the opportunity to give the home side the lead through the spot when the VAR intervened to award the home side a penalty before the end of the first half.

According to Optajoe, a sports data company, De Bruyne’s penalty is the first to miss the target completely in a @premierleague game since October 2018, when in the same fixture at Anfield, Riyad Mahrez blazed over against Liverpool for Manchester City.

The Reds have endured a daunting task without their captain, Virgil van Dijk who has been ruled out of the season due to injury picked up in the draw against Everton in October; winning five out of their six matches, drawing just one(against City) since the Dutchman’s absence.

MORE READING!  Maradona to be buried today outside Buenos Aires

Liverpool who lie in third position behind Tottenham will face Leicester City on the 21st of November in their next Premier League match.

Related Topics:FeaturedLiverpoolManchester City
Up Next