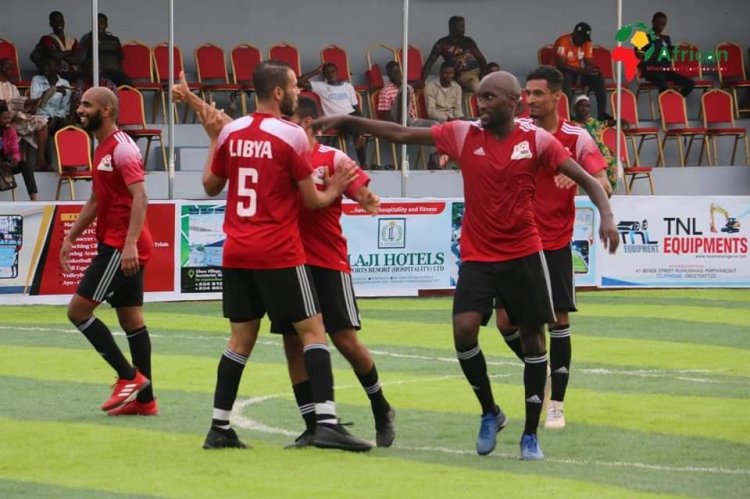 The Egyptian mini-football team has emerged champion of the 2021 African Minifootball Cup of Nations after defeating Libya 1-0 in a tension-soaked final, late on Saturday.

The News Agency of Nigeria reports that the second edition of the mini football AFCON was held from July 8 to 17 at the Ilaji Hotels and Sports Resort Minifootball Stadium in Ibadan.

Egyptian forward, Ehab Taha, had won a dramatic late strike from a set-piece build-up by his teammate, Mahmoud Gamal, in the second half of the extra time. Mohammed Khamies of Libya won the best player of the tournament, while the Egyptian goalkeeper, Ali Gazal, cornered the best goalkeeper award.

The duo of Nigerian Kabiru Adeniji and Ghanaian Bernard Safou went home with the highest goal scorer award having scored seven goals each in the tournament.

Meanwhile, the Nigeria mini-football team, which lost in the quarter-finals to Ghana had secured the fifth African slot to the mini-football world Cup, having defeated Zambia 3-2 in a play-off.

Egypt, Libya, Ivory Coast, Ghana and Nigeria have qualified for the Mini-football World Cup at a yet to be named venue.

Prince Adeshina Araoye, the Chief Operating Officer of Ilaji Hotels and Sports Resort, expressed gratitude to the federal and state governments for the successful hosting of the competition.

According to Araoye, the success to the support and commitment of every member of the organising committee who gave their best to ensure hitch-free competition.

He maintained that the successful hosting of the 2021 Mini-football AFCON had shown the capability of the resort to host the mini-football world cup.

Araoye called on government at all levels and relevant stakeholders to support the development of the new initiative in mini-football in Nigeria.

“We encourage the federal and state governments as well as other stakeholders to support this new initiative. This is another opportunity to engage our teeming youths and solve unemployment in Nigeria,” he said.

He said though the hosting right of the mini-football World cup had not been given to the country, it had already proved it had the facilities to host it.

According to him, we have the logistics and manpower to host any competition, even the world cup if it is given to us.

“Mini football is a new invention, in fact, this is just the second edition. It is not rooted here in Nigeria yet, but the successful hosting of the tournament, means it has come to stay.

“We believe that a lot of stakeholders will find it more engaging and interesting and if the government buys into it, it is going to be a good thing for the nation,” said Araoye.

Related Topics:EgyptLibyaMinifootball Cup
Up Next

Wimbledon finalist Berrettini pulls out of Olympics after sustaining injury