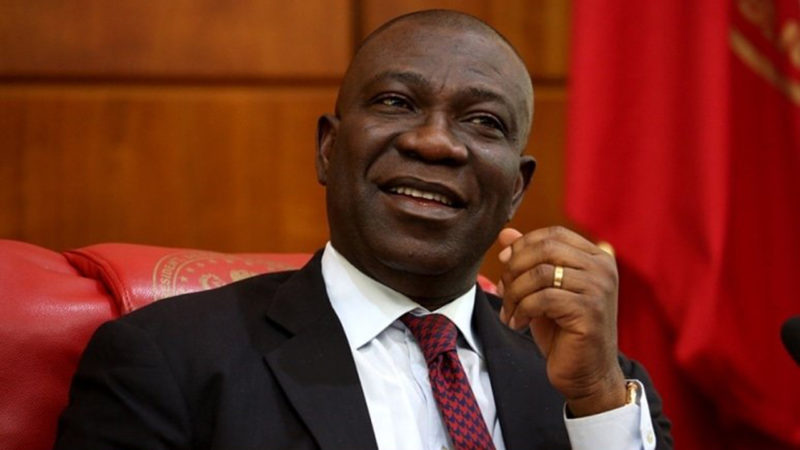 Former Deputy Senate President Ike Ekweremadu has described the political crises in Edo state as an embarrassment and an affront to Nigeria’s democracy.

Senator Ekweremadu was speaking on the sideline of the Enugu Peoples Democratic Party (PDP) congress to elect new executives of the party at the state level.

According to Mr Ekweremadu, the people of Edo state should be given the opportunity to exercise their franchise and elect who they want as their leader.

Ekweremadu called on all the players irrespective of party affiliation to desist from any act that will threaten the young democracy of Nigerian.

“What is happening in Edo State is an affront in democracy, I believe this is not supposed to be so.

“The people should be allowed to decide who their leader should be and that is the difference between democracy and other forms of government.

“So, the issue and attitude of bringing in thugs, bringing in security men to come and determine the will of the people is anti-democracy, I cannot support that kind of attitude.

“I want to appeal to all the players in Edo State, both PDP, APC, and other political parties, to give peace a chance and allow the good people of Edo State to elect their leaders.

“Unless we do that, we are undermining our democracy,” Ekweremadu told newsmen.

The crisis in Edo state ahead of the gubernatorial election is deepening, with the situation moving from the exchange of banters by political rivals, to threats of assassination.

Edo State Deputy Governor, Philip Shaibu at a press briefing on Saturday said there is a plot to assassinate high-profile personalities in the state.

Mr Shaibu noted that the state government has gathered intelligence suggesting that some individuals are in Edo state and their assignment is to assassinate certain known individuals.

“I am hereby bringing to the notice of the general public that these people are in town and we’ve communicated to the security agencies about their activities and why they are in town,” Shaibu stated at the briefing.

The deputy governor called on President Muhammadu Buhari to charge security agencies to “do their work because Edo will not be a theatre of war if these things are dealt with.”