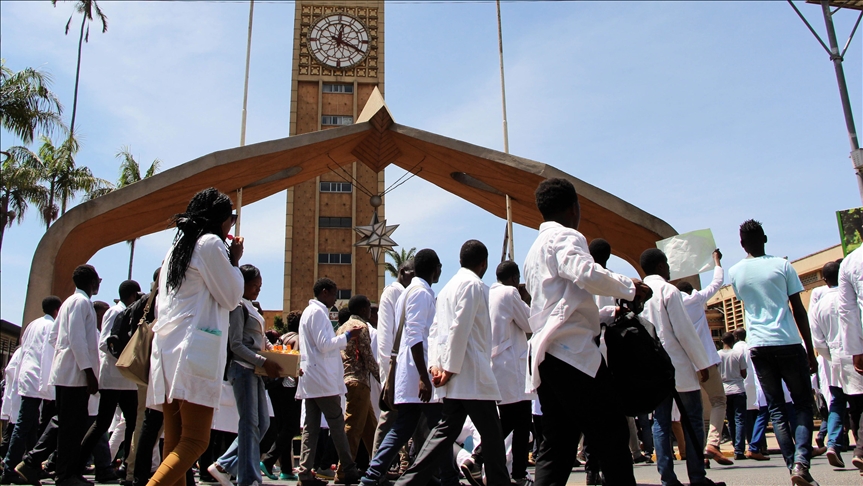 Former Vice-President of the National Association of Resident Doctors, Dr. Julian Ojebo has apologised to Nigerians, saying the aim of April 1 (today) strike was not to complicate the health of the masses.

Ojebo who spoke on a live radio programme on Nigeria Info, on Thursday disclosed that the industrial action was important following the deadlocked meeting with the Federal Government.

The doctors had embarked on a nationwide strike despite Federal Government’s last-minute efforts to stop the action.

The association also justified its action via its Twitter handle @nard_nigeria on Thursday morning.

The message read, “Nigerians must understand that we love them and the strike is not intended to hurt them but to challenge the Nigerian government @MBuhari @Fmohnigeria @LabourMinNG whose responsibilities amongst others is to care for her citizens and labour force to do the needful.”

The union’s President, Dr. Uyilawa Okhuaihesuyi, also confirmed to Channels TV that the strike had commenced by 8.00am Thursday.

The strike is happening at a time when the President, Major General Muhammadu Buhari (retd.), is in London for medical check-up.

The Federal Government had signed a Memorandum of Action with NARD, aimed at averting the planned nationwide strike.

The agreement was signed midnight on Wednesday, after a seven-hour meeting between the government side and the leadership of NARD at the office of the Minister of Labour and Employment, Dr. Chris Ngige.

The meeting deliberated on the issues raised by the aggrieved doctors in their Notice of Trade Dispute, including the non-payment of salaries of some House officers, non-recruitment of House officers, abolishment of the bench fees for doctors undergoing training in other hospitals, non-payment of National Minimum Wage and hazard allowances.

Briefing journalists on the outcome of the meeting on Thursday [today] morning, Ngige said that all the things written in the MOA “will be implemented.”

“Twelve hours is a lot of time. Everybody will be working; Medical and Dental Council of Nigeria will be working and hopefully by tomorrow (Friday), you will experience the payment as agreed here for the second category of doctors (an overflow of the MDCN quota). We hope it must happen tomorrow and continue.

“So, by the time the chairman of the CMDs comes up with his final list and harmonise it with MDCN, we won’t have issue anymore over this payment or whether some doctors have not been paid.”

With regard to other issues raised by the doctors at the meeting, Ngige explained that timelines had been allotted on each of the demands, stating that, “the reason why we are going to reconvene in one month’s time is to look at the assignments given, to know who performed and who has not performed.

“And with this MOA, we hope you get to your members to let them understand better that government has moved proactively to address most of the issues ahead of your coming.”

At the meeting were the Permanent Secretary of the Federal Ministry of Health, Abdulaziz Mashi, his Labour and Employment counterpart, Peter Tarfa, representatives of the OAGF, MDCN and the National Salaries, Wages and Incomes Commission.

Officials of the Federal Ministry of Health, Finance, Budget Office and the National Association of Medical and Dental Council also attended the meeting.

The Chairman of the Senate Committee, Senator Ibrahim Oloriegbe, told one of our correspondents that both sides had resolved most of the issues that led to the strike threat.

Oloriegbe said the resident doctors had also pledged to brief their members about the outcome of their resolution with the lawmakers.

Speaking immediately after the commencement of the resident doctors’ strike on Thursday morning, Ojebo said, “It is true that there were reconciliatory meetings yesterday (Wednesday).

“It’s quite sad that the meetings were called on the eve of the day Nigerian doctors said they were tired of government insincerity.

“Nine months down the line, not even one of the demands has been met. The demands are that the healthcare workers at the risk of infectious diseases should have some form of allowances that could cover them.

“I’m not saying money is the ultimate thing, but there should be some form of stimulus to say we encourage you, keep fighting, but none of this has been done.

Ojebo noted that the doctors decided to embark on the industrial action as instructed by the NARD president, Dr. Uyilawa Okhuaihesuyi.

“This is stemming from the fact that following those reconciliatory meetings, nothing tangible was done and we know that there is so much insincerity on the part of the government.

“It’s painful that we hear from people that this is not the right timing for doctors to go on strike. It’s painful, especially knowing the kind of government we have.

“Like the president [Okhuaihesuyi] said, there is no relationship between politics and medicine. if you want to do politics, do your politics, don’t bring it to medicine.

“All we are saying is that government should come to the table, give us a timeline of what it wants do, we are not saying they should do all of them at once. These are the issues we keep having over and over again and it is painful,” Ojebo said.