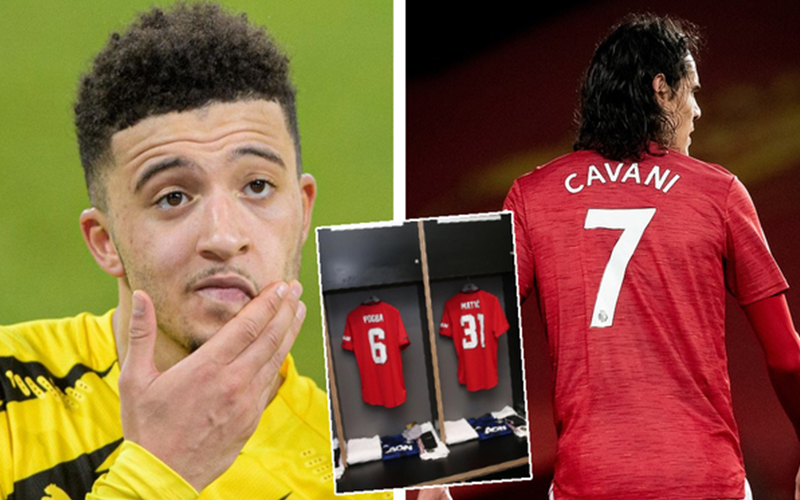 Manchester United striker, Edinson Cavani, is reportedly unwilling to hand Jadon Sancho his iconic No. 7 jersey ahead of the new Premier League season.

WuzupNigeria reported that the 21-year-old completed his medicals in Carrington on Tuesday ahead of his announcement as a United player and he fancies the iconic no.7 jersey currently worn by Cavani.

The former PSG striker has shone brightly for United since his season-long loan deal that was extended by one more year at the end of last season.

On the other hand, the England international has been on their radar ever since the summer transfer window of 2017, when Jose Mourinho tried to bring him to Old Trafford.

But after missing out that year, and in 2019 and 2020, they’ve finally managed to break Dortmund’s resolve, Express Sports reports.

Meanwhile, Sancho is coming off a disappointing EURO 2020 campaign after suffering a penalty heartbreak in the final of the competition against Italy.

Sancho, Marcus Rashford and Arsenal’s Bukayo Saka, all missed their penalties and have been a subject of online racial abuse from trolls after spending the last six weeks with the England squad, and under Gareth Southgate.

A fresh start with United could prove vital as he regains his confidence but he may have to do so without his usual number seven which would be available next summer if Cavani pursues his dream move back to South America at the end of his Old Trafford contract.

DailyStar reports that at the moment: 12, 16, 24, 25, 30 and 32, are all available, and Sancho could opt for the unorthodox no.77 for a year, however, high numbers are seldom seen in the Premier League, and United may refuse the proposal.

It is unlikely for Cavani to vacate the number for Sancho just as Anthony Martial did when Zlatan Ibrahimovic joined back in 2016 but fans are anticipating a partnership between the duo as United aim to end their silverware drought next season.

Since Cristiano Ronaldo’s departure to Real Madrid in 2009, the iconic number seven has been a in the shadows after it was taken up by the like of Antonio Valencia, Michael Owen, Angel Di Maria and Memphis Depay until the arrival of Cavani sparked up the iconic number with his fine display.

The Red Devils open their Premier League campaign at home to their old rivals Leeds United, and their rivalry can properly restart after Leeds’ years in exile as Old Trafford welcomes back fans.

That fixture could be Sancho’s official debut, however, he is likely to make appearances in pre-season friendlies.