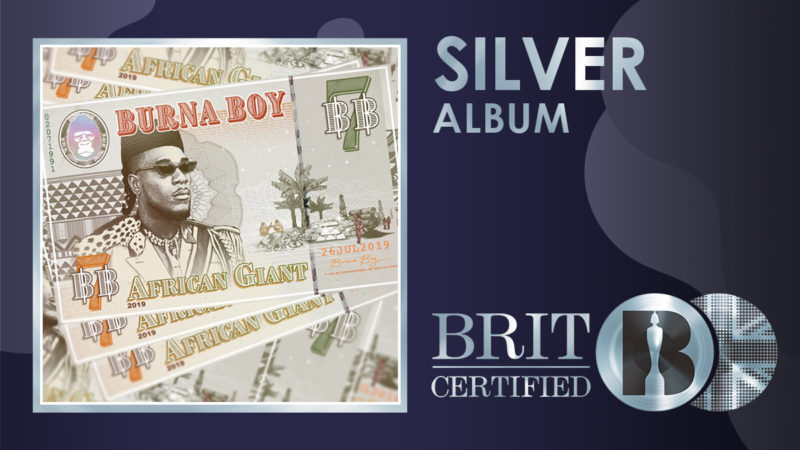 Nigerian superstar, Damini Ogulu, a.k.a Burna Boy has become the first Nigerian artist with a certified silver album, “African Giant” in the UK.

The renowned singer, who said he was so excited over the achievement, took to his Instagram page @burnaboygram to announce the news to his fans and also expressed love to everyone that supported him.

“AFRICAN GIANT SILVER IN THE UK 🇬🇧 & OWN IT X2 PLATINUM.

“Shouts to my brudda Stormzy 🏆 and love to everyone that supports us. Go stream `REAL LIFE’ now,” he wrote.

A silver certification in the UK means an album has sold 60, 000 copies.

This came after news that ‘Own It’ by Stormzy featuring Burna Boy and Ed Sheeran, has a two-time platinum certification for selling 600,000 copies.

On June 4, it was announced that ‘Be Honest’, the 2019 single by British singer, Jorja Smith featuring Grammy nominee, Burna Boy has been certified platinum in France.

A gold plaque can also be handed to an artist, whose single has been streamed 15 million times in the country, thus 15 million streams of a single in France is equivalent to 100,000 pure sales.

Burna Boy in 2017, signed with Bad Habit/Atlantic Records in the U. S. and Warner Music Group internationally.

He released his first major label backed album ‘Outside’ in 2018.

The artist immense contribution in entertainment industry coupled with his numerous songs has made him outstanding.