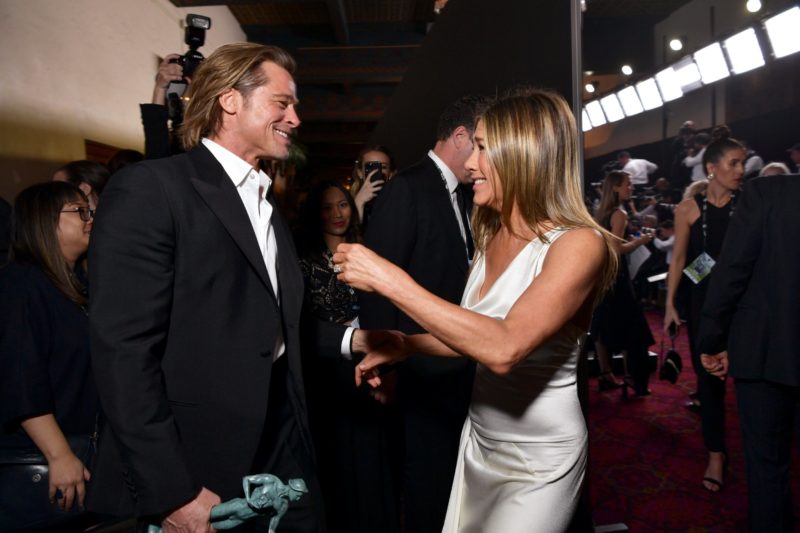 Hollywood actor, Brad Pitt and his ex-wife Jennifer Aniston shared a moment together as they congratulated each other for winning Screen Actors Guild Awards at Shrine Auditorium in Los Angeles on Sunday.

The couple, who went their separate ways in 2005 after Pitt had an affair with co-star Angelina Jolie, were pictured hugging and smiling at each other as they reunited backstage.

Pitt won the award for the best supporting actor for his role in Quentin Tarantino’s Once Upon A Time in Hollywood. While Aniston took home the award for her work in The Morning Show.

When the pair met backstage, they were pictured hugging and smiling at each other. In one photo, Aniston, 50, was seen gently placing her hand on Pitt’s chest as he held her arm before they went their separate ways.

In his acceptance speech, Pitt poked fun at his being single. ‘ I have to add this to my Tinder profile,’ the actor said as he held the statue.

MORE READING!  It is not your fault if your partner cheats, Yemi Alade says

‘Thank you, my brothers, my sisters. This means so much. More than I can possibly fathom. I want you to know I watch everything. I watch you all, and the work has been mesmerizing. So I thank you.’

Moments later, Aniston received her own statue, winning for best actress in a drama and Pitt was filmed watching his ex-wife on a television screen backstage as she gave her own acceptance speech.

Aniston and Pitt were married for five years before he started seeing Jolie. In 2014, Pitt, now 54, and Jolie, 44, got married in 2014, before shocking the world with their divorce announcement in 2016. Their divorce was finalized in 2019.

My love for music brought me this far – DJ Exprezioni