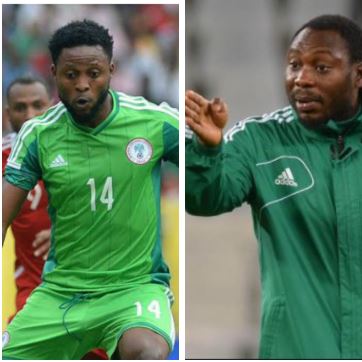 Super Eagles midfielder, Raheem Lawal, has accused the former assistant coach, Daniel Amokachi, of denying him a place in the team taken to 2013 African Cup of Nations in South Africa because of greed.

His reaction to his exclusion from the squad is coming eight years after the AFCON tourney.

Lawal who currently plies his trade for Turkish second division club, Akhisarspor, also blamed former goalkeeper trainer, Ike Shorunmu, for not standing up for him despite the fact that they both hail from the same Mushin roots in Lagos.

The 31-year-old also alleged that Amokachi dropped him because he had particular players he was interested in selling.

He was invited to the Eagles alongside Nosa Igiebor and Obiora Nwankwo in 2012 following their impressive displays with the U-23 side during the 2011 CAF U-23 Championship, where he was joint top scorer with three goals.

But prior to the 2013 AFCON in South Africa, the former Omanlispor was dropped from the squad.

“Amokachi you denied me the MON title in 2013 AFCON. I still got the pain in my heart forever.

“Amokachi you dropped me last minute of 2013 AFCON because you want (sic) to sell some players to Super Eagles.

“But remember that your children have started playing football. Keep resting in peace big boss Keshi.

“Funniest part is that they called the list three times because Amokachi wants (sic) me out from the squad.

“Even the Super Eagles goalkeeper trainer Ike Shorunmu from Idi Oro Mushin could not fight for me.

“Local Mushin boy and only Yoruba for (sic) the squad then who have (sic) nobody in the team then.”

In his reaction to Lawal’s claims, Shorunmu claimed that the former U-23 midfielder was dropped because of his attitude.

“I don’t need to respond to these allegations,” Shorunmu told The PUNCH.

“I was not the Super Eagles coach at the time, I was just an assistant.

“Those who were not in the team then would not have known what happened there.

“He said he’s Yoruba and I didn’t fight for him.

I’d like to challenge him to tell the world what sort of advice I always offered him in camp.

“He’s no doubt a good player but what about his attitude?

“I used to warn him to be calm and not be aggressive when certain decisions didn’t go his way.

“The late (Stephen) Keshi (then Eagles coach) loved him as a player but his attitude was his biggest problem.”

Amokachi could however not be reached for his comments on the issue as he did not pick calls to his mobile telephone line.

He also did not respond to text and WhatsApp messages sent to his line.