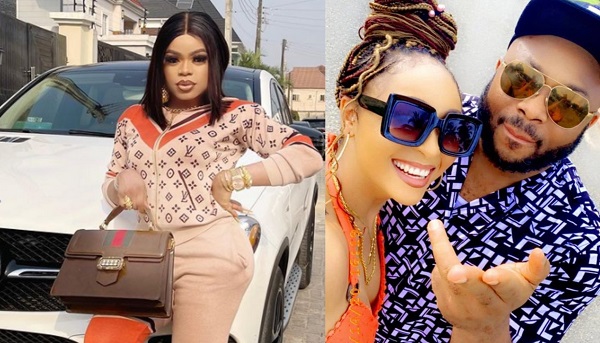 In a series of posts on Instagram, the crossdresser dragged Meurer who has been in the news since the beginning of the week following news that she is now married to Tonto Dikeh’s ex-hubby, Olakunle Churchill.

The marriage created a buzz on social media because Meurer was alleged to be at the centre of Churchill’s crashed marriage with Tonto Dikeh.

Earlier today, in a series of videos posted on social media, Meurer once again stated that she never had an affair with Churchill when he was still married.

According to her, her marriage to him is purely God’s will for her life.

Rosy explained that she had only read online that she was having an affair with Churchill the same way other people read it adding that it was never true.

The actress noted that what she was accused of has now become her reality and fate as she has eventually married Churchill.

Well, Bobrisky is not buying any of her stories and has told her to shut up. In two separate posts on Instagram few moments ago, Bobrisky told Rosy to keep quiet because ”no one needs an explanation from her.”

The cross-dresser who is friends with Olakunle Churchill’s ex-wife, Tonto Dikeh, also called Rosy a “female village parrot.” and an “ashawo”.

He also called her the “no 1 husband snatcher” then pointed out that she finds it difficult to call Churchill her husband.

“Wahala be like industry ashewos. Can someone tell Rosemary to shut up!!!! Why sit in front of a camera for over 20 mins explaining like a female village parrot if you truly don’t care about people’s opinion. No worry we don crown you as the number 1 husband snatcher in 2021 so go and rest. Rubbish.”

See his posts below; 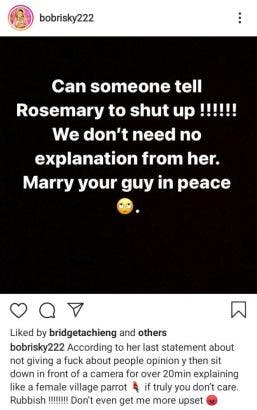 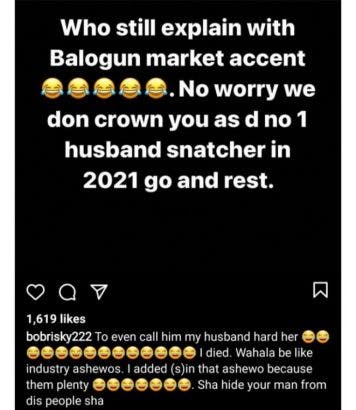 Related Topics:BobriskyFeaturedInstagramRosy Meurer
Up Next

“I Am LAYCON” breaks streaming record in Nigeria