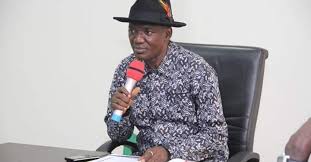 Bayelsa Deputy Governor, Lawrence Ewhrudjakpo, has tasked the people of Azama and Isoni communities to put their peaceful co-existence ahead of any other consideration.

Ewhrudjakpo said this at a meeting with representatives of Azama Community and the Isoni/Azama Peace Committee at his office in Government House on Sunday.

It was reported that the Deputy governor expressed delight that no life has been lost as a result of the dispute. He encouraged members of both communities to sustain the prevailing peace.

Ewhrudjakpo urged the youths of both communities not to take laws into their hands but remain patient as government is taking steps to resolve the issue.

He commended indigenes of both communities for being calm and allowing government to wade into the matter, assuring them of an unbiased approach to the resolution of the conflict, which has lingered on for several decades.

According to him, the government is committed to ensuring that communities within the state enjoy peace and good neighborliness as no development can take place in an atmosphere of rancour.

His words: “Once there is a dispute and a life is lost, that dispute becomes difficult to resolve. Over the years we have not heard that any blood has been killed by either parties on that land. We want to encourage everybody to maintain that path.

“I want to encourage us to calm down, tell the youths to calm down. No matter how strong a matter is, there is always a solution. We will not take sides but address the issues objectively to achieve greater peace between both communities,” he said.

He said contrary to the claim by the Isoni Community in Sagbama Local Government Area, the present location of Azama Community in Southern Ijaw has never been known and used as an evil forest by any community.

King Perekebina called on the government to resolve the issue without bias and assured that the people of Azama will cooperate with the committee to achieve a lasting solution.

In their separate remarks, Chief Ayama Ezi and Daniel Ebitimi, representatives of Tomoyanbiri and Opuwanbiri compounds of Azama, both expressed worry over the claims of Isoni Community as landlords of virtually all the lands in the area, and called for a speedy settlement of the dispute.

Also, Chairman of Sagbama Council, Alale Embeleakpo, and his Southern Ijaw counterpart, Nigeria Kia, thanked the Deputy Governor for convening the meeting and expressed confidence that the Committee would expedite action on the amicable resolution.

Other government officials who made submissions at the meeting were Governor’s Special representative in Southern Ijaw Local Government Area, Temple Ogile.

Others are Technical Adviser to the Governor on Security, Chief Boma Spero-Jack, Commissioner for Justice and Attorney General, Dambo Biriyai (SAN), as well as the Commissioner for Community Development and Chieftaincy Affairs, Chief Thompson Amule.