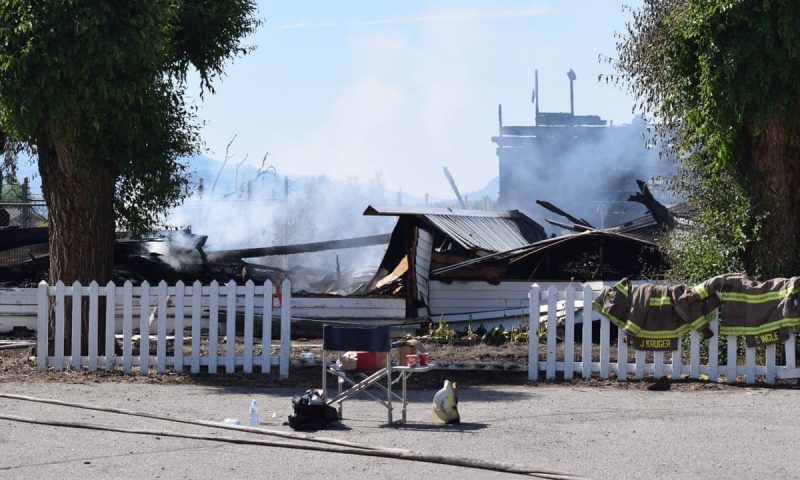 Two days after some catholic churches were burned down on Indigenous land in the southern Okanagan, two more religious centres in the Similkameen Valley of Canada have reportedly been razed on Saturday morning.

St. Ann’s Church on the Chuchuwayha reserve in Hedley – the Lower Similkameen Indian Band and the Chopaka Churches were destroyed by fire at about 4.00 am, officials said.

He said the fires were suspicious and “possibly” linked to the other two in the Okanagan.

“Some of our members attend these churches. They just had a service a couple of weeks ago,” he said Saturday, as he was preparing to leave in a caravan to go to the site of the former Kamloops Residential School to support the community after the remains of 215 Indigenous children were found in unmarked graves there last month.

“Luckily, no one was injured and the fire here was contained before it spread to any of the neighbouring homes,” said Crow.

Crow said Catholic community members were devastated by the fires and by the discovery of the graves, Vancouver Sun reports.

“If you’re hurting at this time, please reach out to somebody and make the call. There is a lot of upset people and it’s … heartbreaking,” he said in a phone interview.

The small Chopaka church was built more than 100 years ago, Crow added.

Penticton South Okanagan Similkameen RCMP confirmed Saturday they are investigating after another pair of churches were destroyed by fire.

Mounties were called out shortly before 4 a.m. to St. Ann’s Catholic Church, while Keremeos RCMP received a call at 4:45 a.m. about the Chopaka Catholic Church on the Lower Similkameen Indian Band.

RCMP say both churches have been destroyed. The fire at the Lower Similkameen church spread to nearby brush, which was extinguished by B.C. Wildfire crews before spreading further.

RCMP spokesman Sgt. Jason Bayda said they are treating both fires as suspicious and trying to determine whether they are connected to the church fires in Penticton and Oliver on Monday.

“The investigations into the previous fires and these two new fires are ongoing with no arrests or charges,” he said.

Police are asking for anyone who may have witnessed anyone or any vehicle in the area of either church in the early hours of Saturday to contact the Penticton RCMP detachment at 250-492-4300.

Two other Catholic churches on Indigenous land — the Sacred Heart Church and St. Gregory’s Church — in the southern Okanagan were destroyed by fire early Monday.

Bayda said an officer on patrol spotted fire coming from the Sacred Heart Church on Penticton Indian Band land at around 1:20 a.m.

Penticton Fire and Rescue were called and arrived to find the church engulfed in flames. Both churches burned to the ground and police are treating the fires as suspicious.

The wooden churches were each at least 100 years old and are the responsibility of the Roman Catholic Diocese of Nelson.

Father Thomas Kakkaniyil, the priest in charge of St. Gregory’s Church, said Sunday had been the first mass at the church in over a year due to COVID-19. He said the church had daytime security for the mass, but there was no security overnight.

“Somebody from outside came and burned it, as I understand it,” Kakkaniyil said. “It was done on the Osoyoos First Nation land but not by those people. It was somebody else.”

A spokesperson for the Roman Catholic Archdiocese of Vancouver said there would be no comment on the fires.

Related Topics:canadaCatholic Church
Up Next